Abhishek Bachchan celebrates his 41st birthday on Sunday. His father and superstar Amitabh Bachchan shared an adorable picture of Abhishek and gave details about his birthday celebrations 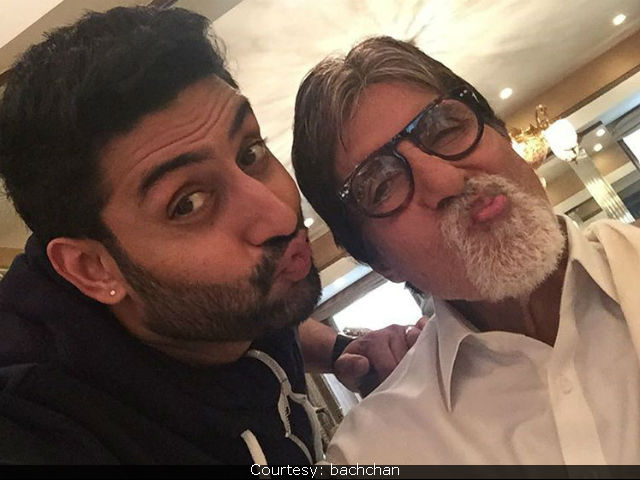 As Abhishek Bachchan celebrates his 41st birthday on February 5, a fond papa and superstar Amitabh Bachchan shared an unseen picture of the birthday boy along with his sister Shweta Nanda. Through the tweet, Mr Bachchan revealed how the family celebrated Abhishek's birthday. He captioned the image as: "A Chelsea win .. a Pizza from Daughter's favorite .. a wishes at 12 .. and another year for Abhishek gone by ..#HappyBirthdayAB" (sic). The Pink actor also retweeted many wishes from the stars' fan pages. Last year, Abhishek celebrated his birthday with his family in Maldives. Wishes came pouring in for the actor since morning. B-Town celebs including Bipasha Basu, Karan Johar, Sonam Kapoor, Shilpa Shetty and others made sure to wish their very own 'Juniour Bachchan.'
Here's what Amitabh Bachchan wrote for Abhishek:


T 2524 - A Chelsea win .. a Pizza from Daughter's favorite .. a wishes at 12 .. and another year for Abhishek gone by ..#HappyBirthdayABpic.twitter.com/N7sPIV2RUn

In his blog, Mr Bachchan, 74, shared a few images of the father and son and wrote: "He, my son, Abhishek turns 41 .. and I cannot imagine the time passed .. those hours at the Breach Candy Hospital where Jaya struggled with her labor .. and that OPT door opening and Dr Shah, our family doctor, poking his head out of the door and asking - 'what did you want ..?' .. and his anticipated smile giving away that a son had been born .. the champagne bottle opened, the nurse and sisters on duty were given a sip each much against their wishes and protocol, but .. there it was .. excitement .. and the joys of another addition to the family .." (sic)
Abhishek made his Bollywood debut in 2000 with J P Dutta's Refugee also featuring Kareena Kapoor. He gave his first commercial hit in 2004 with Dhoom.
Abhishek married Aishwarya Rai Bachchan, his co-star from Dhai Akhsar Prem Ke and Guru in 2007. The couple's first child, a daughter, whom they have named Aaradhya was born in November 2011.
A die-hard football fan, Abhishek co-owns football team Chennaiyin FC in the Indian Super League (ISL) and actively promotes the game.
Check out how Bollywood celebs wished Abhishek on his 41st birthday:


Happy birthday @bachchan Stay happy forever and ever. Hugsssss and love from us

Happy Birthday @bachchan !! #Delhi6 was special, and so are you

Happpppyiest Birthday to my dearest @juniorbachchan, " Bhaiyyu" u are Mr Nice Guy" personified .Stay happy and positive as u always are

Abhishek Bachchan, who was last seen in Sajid Khan's Housefull 3, also starring Akshay Kumar and Riteish Deshmukh, will be seen in Hera Pheri 3 this year.