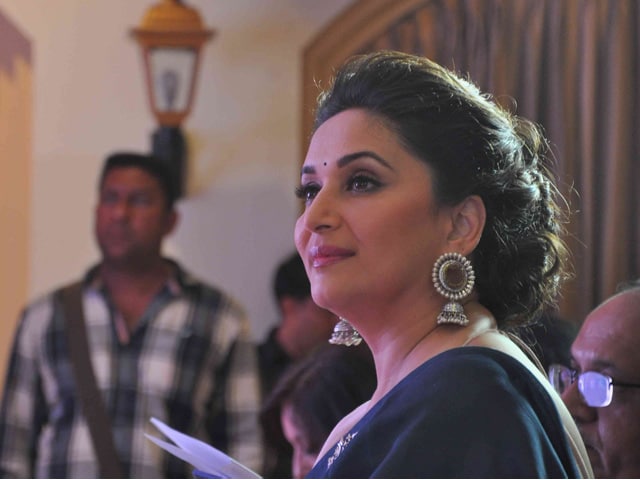 Madhuri Dixit photographed at an event in Mumbai.

Ganesh Chaturthi festivities have begun across the country and luckily for us, social media is around to help spread the good wishes and cheer. Madhuri shared her excitement at the start of the festival, while the ever-witty Twinkle had a secular message to spread. Also, Raveena and Arpita are batting for eco-friendly utsav this year

Ganesh Chaturthi festivities have begun across the country and luckily for us, social media is around to help spread the good wishes and cheer. Twitter is flooded with messages from celebs like Amitabh Bachchan, Sridevi, Madhuri Dixit, Alia Bhatt and Shraddha Kapoor. Sachin Tendulkar, Arjun Rampal and several others have posted pictures of themselves with Ganpati. The small screen's big stars have also tweeted, led by actor brothers Ronit and Rohit Roy. (In Pics - Happy Ganesh Chaturthi: Celebs Bring Bappa Home)
Ganpati Bappa Morya, is the mood on Twitter, Here's a look at who's tweeted:
Here's how Big B wished everyone:

Sridevi too wished her fans:


Happy Ganesh Chaturthi to all of you. May this day bring prosperity, happiness and peace in your lives. Ganpati Bappa Morya!


Happy Ganesh Chaturthi. My most favorite celebration of the year! pic.twitter.com/l7G7mLxvUY

This was Alia's shaandaar wish:

Here's a wish from Shraddha too:

Raveena Tandon had an eco-friendly one:


All those with eco friendly Ganpatijis and decor please send pics!will get a big heart and retweet from me ! Not much but worth the effort!!

Arjun Rampal and Ritesh Sidhwani are among those who brought Bappa home:


GANAPATI BAPPA MORYA. Our Ganesha is home. Myra's favourite. So beautiful. Love and Peace to everyone. pic.twitter.com/N6XcylIXIp

Arpita Khan Sharma had tweeted a photo of her Ganpati two days ago. Ganesh Chaturthi is a red letter occasion for the Khans but we're not entirely sure whether this idol is going to Arpita's in-laws' home or to the Khan-daan:


1 day to go to welcome him home, our beautiful Eco friendly Ganpati Bappa love this festival

She also has special chocolate modaks for Bappa:

From south India, actor Prabhas shared a photo of a Baahubali-inspired Ganpati:

At the Roys, the festival was a family affair:


Happy Ganesh chaturthi from our family to yours.. Ganpati Bappa morya pic.twitter.com/HGw6DIsekc

Blessings from our home to you and your families. Jai Ganesh Deva! pic.twitter.com/pJz1rGqqGO