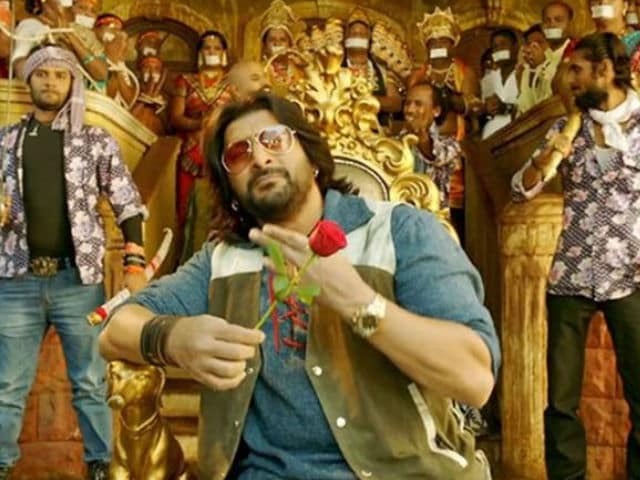 A poster of the film The Legend of Michael Mishra.

Haryana government banned the screening of the Hindi film The Legend of Michael Mishra in the state for eight weeks. A decision to this effect was taken in view of the reports that there was resentment among members of the Valmiki community regarding some objectionable utterances in a part of the film, an official spokesman said.
This order would remain in force for eight weeks until further orders, he said.
The film, produced by Kishore Arora and directed by Munish Jha, was slated to release on August 5.
He said the government had received information that certain organisations and individuals were protesting against the exhibition of the film, as the lead actor Arshad Warsi in a particular scene utters "objectionable words" which have the potential to outrage the religious feelings of the community.
Acting on the complaint, a committee headed by Additional Deputy Commissioner Hema Sharma was constituted by Deputy Commissioner, Panchkula, Garima Mittal to watch the film, he said, adding the committee also included Deputy Excise and Taxation Commissioner R K Chaudhary, Assistant Commissioner of Police, Headquarters, Mukesh Malhotra, and District Information and Public Relations Officer as its members.
The committee recommended it was essential to take necessary action in stopping the release of the film in cinema halls and multiplexes as it could cause communal violence and damages to public and private property and a serious law and order situation, he said.
Therefore, with a view to maintain peace and social harmony, the government has suspended the exhibition of the film under Section 6 of the Punjab Cinema (Regulation) Act, 1952 with immediate effect and during this suspension, the film would be deemed to be an uncertified film throughout the state, the spokesman said.
Punjab government had also banned the screening of the film.
(Except for the headline, this story has not been edited by NDTV staff and is published from a syndicated feed.)