Hazel Keech and Yuvraj Singh's wedding kicked off with a mehendi and sangeet on November 29, followed by a Sikh wedding in Chandigarh the next day 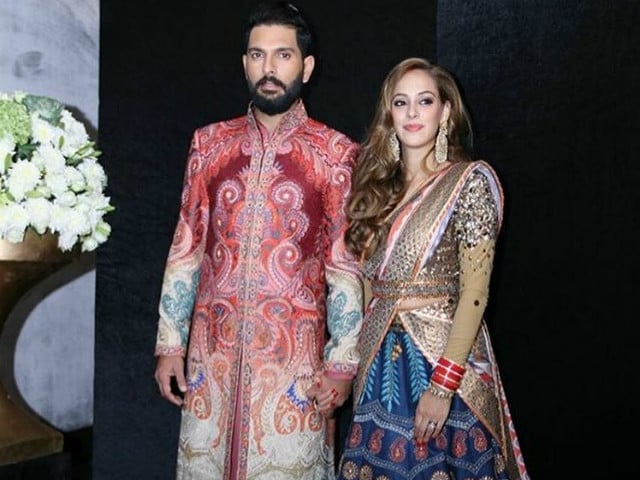 The 10-day wedding across three cities of Yuvraj Singh and actress-model Hazel Keech was brought to a close with a very starry reception gala in New Delhi on December 7. Yuvraj and Hazel hosted a grand party with a guest list that included cricketers Sourav Ganguly, M S Dhoni and Virender Sehwag, some of who arrived with their wives. The 'Yuvraj Hazel Premiere League' kicked off with mehendi and sangeet ceremonies on November 29, followed by a Sikh wedding in Chandigarh the next day. Hazel and Yuvi whisked the party off to Goa, where there was another wedding according to Hindu rituals. It was preceded by a party with friends and family, and was accompanied by a beach-side reception.
On Wednesday night, the paparazzi just could not have enough of the stunning couple, and pictures have been shared on social media. The newly-weds complemented each other in contrasting outfits from the designer books of J J Valaya - Hazel was resplendent in blue and sequinned beige while Yuvraj beamed next to his bride in shades of red.

Sourav Ganguly was the special guest of the evening. Photo toh banta hai!

Dhoni and wife Sakshi could not be happier for their friends:

Till the time more pictures are made available, let's have a look at Yuvi and Hazel's journey so far starting, November 29.
Yuvi and Hazel love selfies. Here's their first before the shaadi saga began:


To happy times ahead ! @hazelkeechofficial

And the groom was ready for the mandap:

The night that was:

Inside the Goa wedding:

Right after saat phere in Goa:


Ceremony 2 is over ! Time to relax @hazelkeechofficial

Yuvi and Hazel's first dance was on the sands of Goa:

The spotlight followed Yuvi and Hazel as they walked down the aisle hand-in-hand:

There was also a post-wedding sangeet on December 5. Here's Yuvi with Team bride:

Yuvraj Singh, 34 and Hazel Keech, 29, got married at Dera of Baba Ram Singh Ganduan Wale in Duffera, Fatehgarh Sahib on November 29. In an interview with ShaadiSaga, Hazel opened up about their honeymoon plans. Both Yuvraj and Hazel are in two minds between opting for an adventurous or a lazy honeymoon. "I would still stick to Hawaii because I love to surf and over there it's quite easy. So, I am desperately trying to get him along the ocean with me and surf. But that's a different thing. When Yuvi is playing cricket, he works so hard but when he is on a holiday, he wants to do nothing. He becomes a vegetable. So we are having a little bit of a discussion between us whether to be adventurous or be very, very lazy," Hazel told ShaadiSaga.