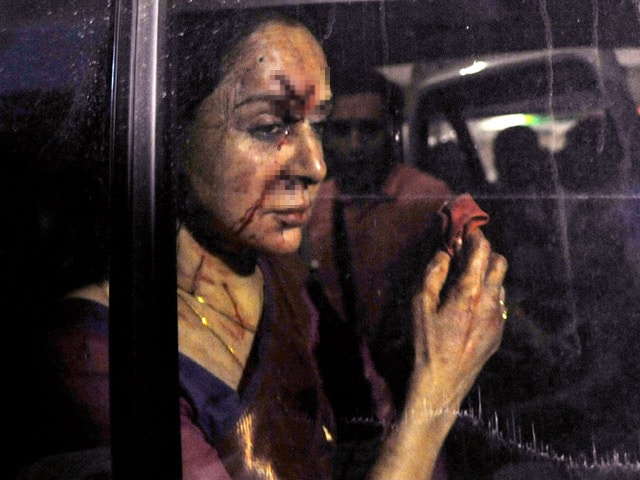 Hema Malini being rushed to a hospital in Jaipur after being injured in a road accident. (Image courtesy: PTI)

"I can realise the hard time the family is facing after her death," Hema Malini said in a statement

Actor-turned-politician Hema Malini has expressed her "deep sorrow" over the death of a child in a road accident involving her car, saying she was "very sad and in a distressed mind" after hearing the news.
In a statement released this evening, Hema Malini, who herself was injured in the accident last night and recuperating in a hospital in Jaipur, said, "I can realise the hard time the family is facing after her death. I pray to god to give them strength to bear this loss." (Also Read: Hema Malini's Driver Arrested After Accident in Which a Child Was Killed)
Hema Malini, 66, said that the incident was "most unfortunate".
Two-year-old Chinni was killed and her father Harsh Khandelwal and three others were injured when their car and Hema Malini's Mercedes collided last night in Dausa near Jaipur.
Hema Malini also wished early recovery of those four injured people.
She thanked her well-wishers saying she is "overwhelmed by their greetings and their concern over my health".
The BJP MP from Mathura underwent a surgery for her wounds at Fortis hospital and was doing fine, doctors attending to her said. She was also treated for a minor fracture on her nose.