"When I went to meet Guru Dutt, he said, 'Listen, what are you going to do with me? You will be an assistant and would get no opportunity to do anything else. You will just be a 'gofor',- revealed Shyam Benegal 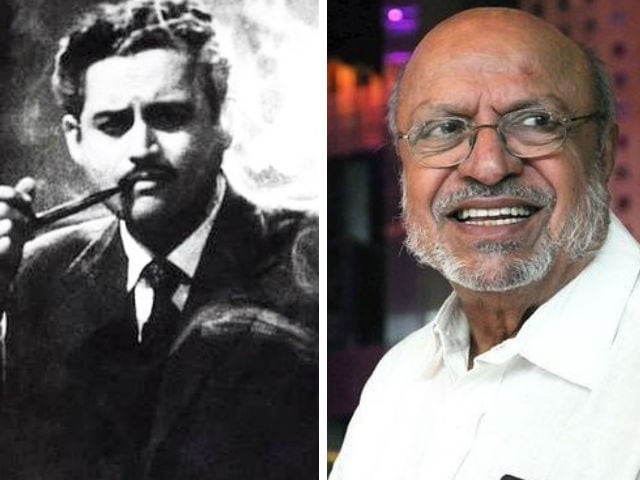 This image (left) was posted on Instagram by oldbollywood_movies; a file photo of Shyam Benegal

When Shyam Benegal first came to Mumbai looking for work in the film industry, he met his cousin-legendary filmmaker Guru Dutt, who advised him to start off on his own rather than be an assistant to him.
Mr. Benegal said having a director like Mr. Dutt in the family was a huge inspiration for him to leave Hyderabad, and come to Mumbai in the hope of making a film here.
"Having Guru Dutt as a cousin was a great advantage. Not that he helped me, but it was a kind of goal. Because he was a film director, it meant I could also be a film director," Mr. Benegal told reporters here last evening.
When he quit his job in Hyderabad, Mr. Benegal reached Mumbai and headed to meet the Pyaasa helmer.
"When I went to meet Guru Dutt, he said, 'Listen, what are you going to do with me? You will be an assistant and would get no opportunity to do anything else. You will just be a 'gofor'.
"In film line, a 'gofor' is a 'go for this go for that' person. Which means you won't really get to do anything except run errands for me," the 81-year-old director said.
Mr. Benegal was speaking at the National Institute of Industrial Engineering's special event 'Avartan'. The director was part of the celebrity talk show - Cita De La Prerana - which also included Piyush Mishra and Makarand Deshpande.
In the quest to achieve his dream of making a film, the Welcome to Sajjanpur director followed Mr. Dutt's advice.
"He (Guru) said, he had started off as a dance director and made his way to directing. So eventually, I also thought the best possible way would be to join an advertising agency, as I had a certain amount of ability to write," Mr. Benegal said.
After working for many years in advertising agency, he finally made his debut as director in 1974 with Ankur.
The director, however, shared that he had approached a well-known advertising film distributor, asking him to produce the film, who in turn agreed to do so but had two conditions.
"One was, I am going to give you a sum of money, which was actually very small, and I won't give you a penny more than that to make the film. Second was, you won't get any money after you've been paid your fee.
"If the film makes money, I make money. But remember, you will make a name. I made a film called Ankur which became very successful. It happened exactly the way he had said. He made the money, I made the name and so my career started," he said.
Post that, Mr. Benegal went on to make films like Nishant, Bhumika, Mandi, Manthan and Zubeidaa.
(Except for the headline, this story has not been edited by NDTV staff and is published from a syndicated feed.)