I'm with her, tweeted two big Bollywood stars - Rishi Kapoor, who has an opinion on everything, and Salman Khan, who usually keeps politics at an arm's length 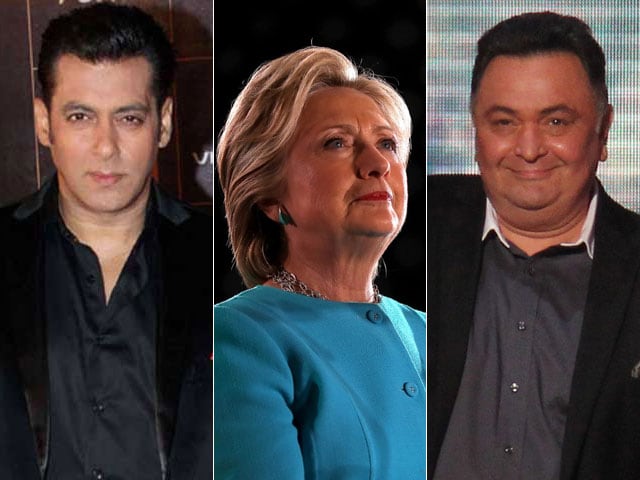 The race to the White House ends on November 8 and the entire world, not just USA, is choosing a side. Here in India, Bollywood has ranged themselves firmly on the side of one candidate - Hillary Clinton.
I'm with her, tweeted two big Bollywood stars - Rishi Kapoor, who has an opinion on everything, and Salman Khan, who usually keeps politics at an arm's length.
Democrat candidate Ms Clinton, who has been endorsed by several American celebrities, also gets a cheer squad in India. Her opponent Donald Trump has received no votes of confidence here, so far.
Mr Kapoor asked Americans to vote for Hillary Clinton for 'peace, stability and harmony':


POTUS. Go,Hillary Clinton!!! Please elect her as your new President if you want peace,stability and harmony. Donald Duck is no option! pic.twitter.com/u3WTn8F9Wj


Hope you win. May god give you the strength to follow the constitution and human values. All the best.#HillaryClintonforpresidentpic.twitter.com/lelPESTHEK

Kabir Bedi wished for the 'historic moment' when Hillary Clinton would become the first woman President of the US.


Wishing @HillaryClinton all success in #USElections2016! A woman President of #US would be a truly historic landmark. #ImWithHer#USElectionpic.twitter.com/DISDjWMgXk

Mallika Sherawat posted a picture with outgoing US President Barack Obama and tweeted:


My full support to the Democrats,praying for #HillaryClinton victory @HillaryClinton@HFA@POTUSpic.twitter.com/pABREo5cjT