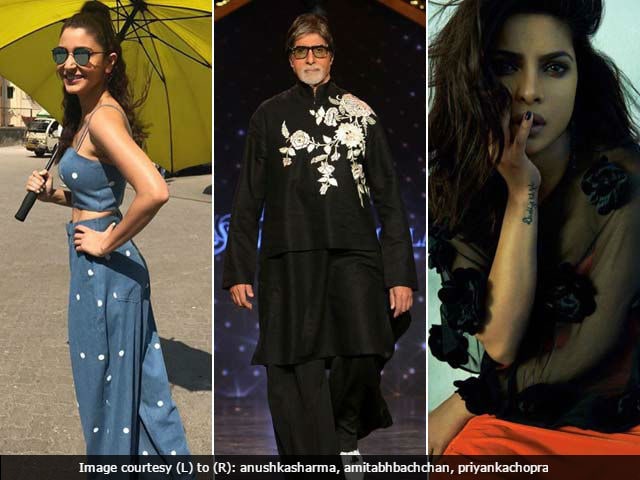 On the auspicious occasion of Holi, Bollywood celebrities like - Amitabh Bachchan, Priyanka Chopra, Anushka Sharma, Rishi Kapoor and Riteish Deshmukh sent out good wishes to their fans and well-wishers on social media. Holi, also known as the 'festival of colours' or 'festival of love, is celebrated in a grand way by our stars. The festival signifies the victory of good over evil and is also celebrated as a thanksgiving for a good harvest. Neetu Kapoor shared an adorable throwback picture of Ranbir and daughter, Riddhima during Holi celebrations. The picture shared by the 58-year-old actress shows Ranbir 'more interested' in ladoo and his sister posing for the cameras.
Check out a few posts shared by the Bollywood celebrities on social media.
Amitabh Bachchan, who is not participating in the Holi celebrations this year, tweeted:


T 2461 -" The quieter you become the more you can hear. "
HAPPY HOLI pic.twitter.com/ExPOtZmZJO

Priyanka Chopra, who is currently shooting for the second season of American television show Quantico, shared a picture on Instagram wishing her fans a 'safe and beautiful Holi'


Do me a favour let's play Holi! Here is wishing everyone a safe beautiful wonder filled Holi..

Abhishek Bachchan posted an image of Holika burning, captioned: "May the Holika burn away all your sorrows and evils. #happyholi(sic)."


May the Holika burn away all your sorrows and evils. #happyholi

Ileana D'Cruz, who is currently in London shooting for her upcoming film Mubarakan, shared a video with her co-stars Ahitya Shetty, Arjun and Anil Kapoor, captioned: "Just a little msg from @athiyashetty @arjunkapoor @anilskapoor and yours truly #mubarakan #mubarakaninlondon(sic)."

Anushka Sharma shared a thoughtful message on social media. The 28-year-old actress posted an image of Shashi the friendly ghost from her upcoming film Phillauri urging fans not to throw colours on animals.


Please pay heed to this request. Think it is absolutely our responsibility to protect them. Pass on the message specially to the children pic.twitter.com/tKcw6V9KpZ


Happy Holi everyone May the festival of colours bring all the happiness, light & colour into ur lives & take away the darkness. Ting#Holi #Fun #Hubby #Lasunshine

Happiness comes in various colours.... Happy Holi ... Have a great one, safe one & most importantly a responsible one.