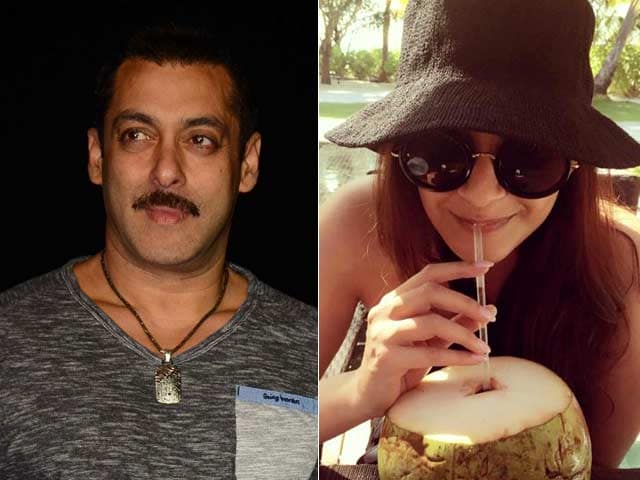 Salman Khan photographed on his birthday in Mumbai and the image on the left has been posted on Instagram by sonamkapoor.

When Salman Khan was asked about his New Year plans he said, "Nothing just work. Like every year." Meanwhile, Sonam Kapoor, elated with the response to her role in Salman's Prem Ratan Dhan Payo, is currently enjoying a vacation in Maldives with friends and family

After a busy year, most of the Bollywood celebrities are planning to ring in the New Year with their loved ones at locations abroad.
Apparently, superstar Shah Rukh will be spending time with his family in Dubai, while Aamir Khan is in Switzerland with wife Kiran Rao and son Azad.
However, when Salman Khan was asked about his New Year plans he said, "Nothing just work. Like every year." The Dabangg Khan recently celebrated his 50th birthday at his farmhouse in Panvel.
Ranbir Kapoor and Katrina Kaif are reportedly going to be in Mexico for the New Year, while Ranveer Singh and Deepika Padukone will be in Europe. (Also Read: When Katrina Kaif Joined Ranbir, Kareena for Kapoors' Christmas Party)
Actress Priyanka Chopra, who has garnered applause for her performance as Kashibai in Bajirao Mastani, is with her girl gang abroad.
Meanwhile, Sonam Kapoor, elated with the response to her role in Salman's Prem Ratan Dhan Payo, is currently enjoying a vacation in Maldives with friends and family.
Earlier, Sonam had said, "I am going to Maldives with my friends. I don't keep resolutions as I break them."
The royal Bollywood couple - Kareena Kapoor Khan and Saif Ali Khan - will reportedly, welcome the New Year in Switzerland.
Reports have it that Aishwarya Rai Bachchan, who made her comeback on the silver screen with Jazbaa, had celebrated Christmas in New York with her actor husband Abhishek and daughter Aaradhya, and the couple apparently plan on to celebrate the arrival of the New Year in the city.
"Wishing everyone a very happy and a prosperous new year," Aishwarya said.
Actress Vidya Balan has apparently travelled abroad with her husband Siddharth Roy Kapur for New Year and her birthday, which is on January 1.
Apparently, this is the first time Vidya will be away from her parents on her birthday.
Dabangg actress Sonakshi Sinha will reportedly, be in Bangalore as her best friend is getting married next year. So on New Year, she will expectedly be with her gang of friends.
Actress Shilpa Shetty Kundra is currently in London along with her husband Raj Kundra and son Viaan.