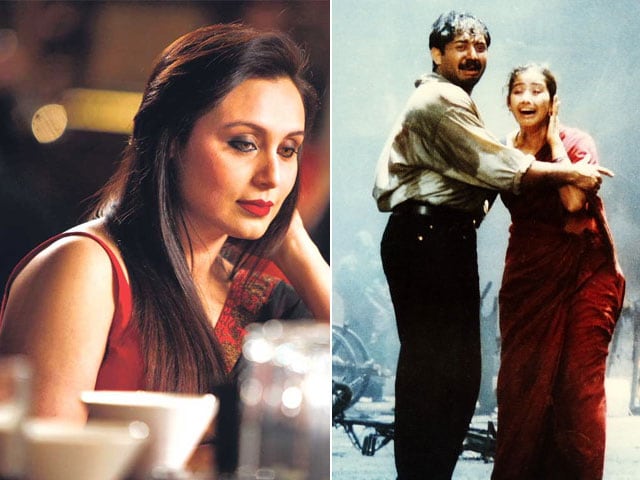 Rani Mukerji in a still from Bombay Talkies (left) and Manisha Kiorala and Arvind Swami in Bombay.

'What's in a name?' Well, that the Censor Board is not into Shakespeare became evident when it showed a red flag to singer Mihir Joshi for using 'Bombay' in one of his tracks titled Sorry.
The song from Joshi's album Mumbai Blues was released online a few months ago and following its popularity, the music video was supposed to be released on television. However, as mid-day reported yesterday, the Censor Board asked for Bombay to be removed from the lyrics before clearing it for the tube. The certificate was issued on December 5 last year.
Imagine the repercussions if the city's colonial name has to be beeped out every time it pops up in songs or film titles. Why, even the talented Carnatic singer Bombay Jayashree would have to lose her identity and rename herself as *beep* Jayashree! Weird, isn't it?
Ready to remove
Filmmaker Karan Johar had to face political heat for using 'Bombay' in Wake Up Sid (2009). A regional outfit halted the film's screening at some city theatres but KJo reacted quickly, apologising for the usage and putting up a disclaimer in the first frame of the film starring Ranbir Kapoor and Konkana Sen Sharma.
Sorry, can't change
New York-based director Joseph Mathew-Varghese refused to follow in Karan's footsteps and change the name of his film, Bombay Summer. In an earlier interview, he had said, "I will never change the English title of my film. One of the main goals for making my first narrative film is that I want to show India in transition. The city of Bombay forms the backdrop of my film. There are images of an abandoned textile mill and a chawl. They stand for all that Bombay was. Ten years down the line, one might not even get to see all these."
If he had approached the Censor Board for certification, his film would have well reached us as *beep* Summer. As if the summers didn't do enough damage by getting under our skin, prefixing it with a high-pitched beep would have only assaulted our ears.
Bizarre pitch
Bombay Talkies, which released in 2013, managed to escape the Censor Board's axe. Otherwise, besides the title, even Apna Bombay Talkies sung by various singers and picturised on Bollywood stars would have been annoyingly punctuated with beeps. Just imagine the beginning: "*beep* Talkies, haan *beep* Talkies, apna cinema haan *beep* Talkies..." Would you want to listen further or fling your music player into the Arabian sea hoping it never returned?
Swear for beep
If the Bombay-Mumbai issue persists, what will happen to Anurag Kashyap's upcoming film from Bombay Velvet? Will he rename it as 'Mumbai Velvet' or allow the beep as it comes? Well, whatever be the case, we guess it wouldn't be without Anurag directing a few expletives at the Censor Board.
Lucky it didn't happen
Mani Ratam's critically acclaimed film Bombay based on communal riots would have had the funniest title - just a beep. And imagine, Salaam Bombay as Salaam *beep*. Or, Kya Yeh Bambai Hai as Kya Yeh *beep* Hai. And oh, Kaizad Gustad's Bombay Boys (1998) starring Naseeruddin Shah and Rahul Bose named *beep* Boys today? Now, let's not allow our imagination to run wild and fill in the beeps.
Playing it safe
Joy Mukherjee's Love in Bombay co-starring Waheeda Rahman released in 2013, nearly 42 years after it was made. The film was also marketed under the name 'Love in Mumbai'. It was wise of him to be safe rather than sorry.