How Deepika Padukone's Forbes Rank Compares to the Men. World, Do Keep Up

Deepika Padukone's $10 million puts her way, way behind even Harrison Ford, who occupied the last spot on the actors' list of 20 with $15 million 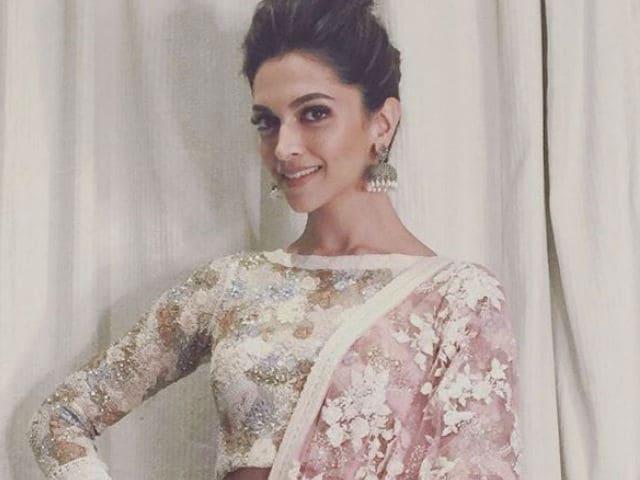 The euphoria of seeing Deepika Padukone's name on the list of the world's 10 highest paid actresses wore off the minute Forbes released its list of top 10 actors. As always, women trail dismally, a distant speck behind the men - if this were an Olympic sport, they missed the podium by two places.
As actress #1, with earnings of $46 million, Jennifer Lawrence limps to sixth place on the combined list - behind Dwayne 'The Rock' Johnson, Jackie Chan, Matt Damon, Tom Cruise and Johnny Depp. Deepika, 30, is in last place - her $10 million puts her way, way behind even Harrison Ford, who occupied the last spot on the actors' list of 20 with $15 million.
This is depressing news, not least because Deepika made more films than Harrison Ford last year - Piku, Tamasha and Bajirao Mastani vs Star Wars: The Force Awakens and The Age of Adaline. Plus, she filmed xXx: The Return of Xander Cage - so she worked harder but was paid less. Indeed, three actresses above Deepika on the list of 10 all made less than Mr Ford last year - Amy Adams with $13.5 million, Julia Roberts with $12 million and Mila Kunis with $11 million.
Even more depressingly, Deepika is eclipsed completely by the Indian actors in the top 20. Amitabh Bachchan, her co-star from Piku, is assigned a spot much lower than her tenth on the list of actors but made twice as much as she did in the last year.
Salman Khan is also comparatively lower ranking-wise, but earned more.
Akshay Kumar, Deepika's equal in rank at #10 on the actors' list, made three times as much as she did. Shah Rukh Khan, at #8, equaled last year's topper Robert Downey Jr's earnings this year with $33 million.
Here's a graphical representation of where exactly Deepika stands: 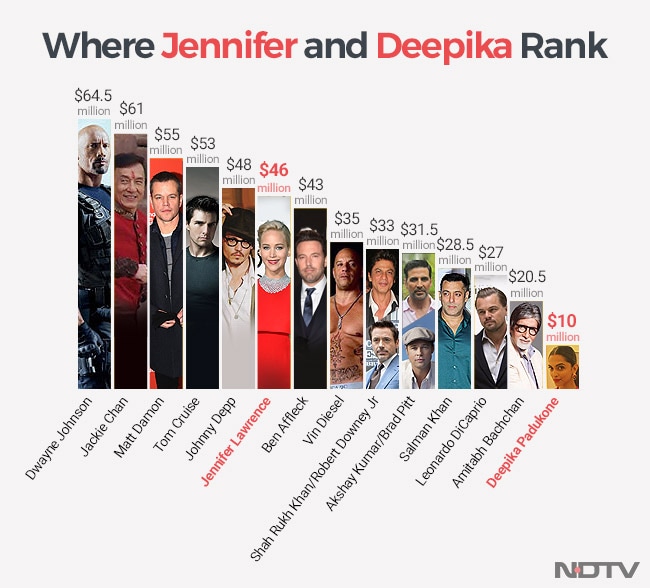 It gets worse. Deepika Padukone is one of the biggest stars at home, male or female, but chances are that her paycheck - impressive as it sounds - is inferior not just to the Indian actors who appear on the worldwide list of 20, but even to other male stars in Bollywood. Actors junior to the Khans, Akshay and Big B reportedly breached the Rs 10 crore per film mark much earlier than Deepika, whose Rs 12 crore salary for the upcoming Padmavati generated breathless headlines weeks ago.
What does it mean when we're so thrilled to discover Deepika Padukone making it to a top 10 list despite being paid so much less than her male colleagues? It means that working twice as hard and making more films will not entitle actresses to a fee that begins to that compare to their male co-stars, not even when both receive equal screen time, like in Piku. It means that actress Patricia Arquette's calling for equal pay in her Oscar speech fell on deaf ears, despite the standing ovation she received from the women in the audience.
It means that the world needs to keep up.