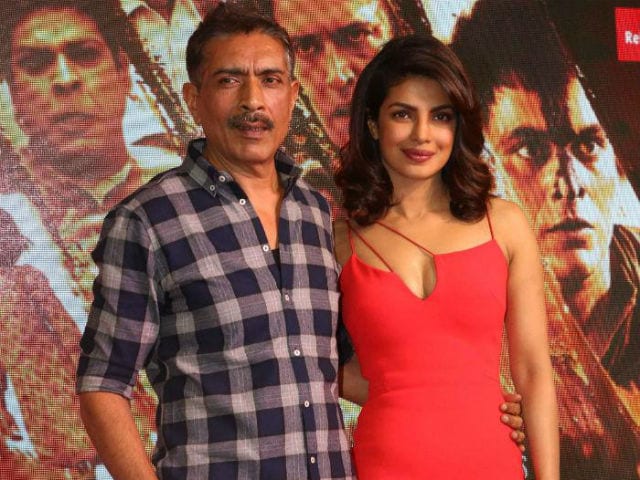 Priyanka Chopra, Prakash Jha photographed at an event in Mumbai.

"How we prepared her, taught her to salute, made her wear khaki and made Priyanka Chopra IPS officer Abha Mathur, benefited Quantico. She is doing good work because of that, on the basis of our training. And now she is doing Baywatch," said director Prakash Jha

Training actress Priyanka Chopra for the role of a cop in Jai Gangaajal benefited her role in international television show Quantico, says director Prakash Jha.
"Priyanka Chopra has done all the action by herself. And the action in our films is very realistic, and realistic is much more difficult. She was completely fit, the muscles she built for Mary Kom benefited us," Mr Jha said at the launch of the song Maya Thagni from the film.
"How we prepared her, taught her to salute, made her wear khaki and made her IPS officer Abha Mathur, benefited Quantico. She is doing good work because of that, on the basis of our training. And now she is doing Baywatch," Mr Jha said.
Priyanka's role in television show Quantico sees her playing an FBI agent, which also required skilled action.
Manav Kaul, who plays the negative character of an MLA in the film, quipped that for one of the action sequences, a soft punch by Priyanka gave him much pain, which lasted for a month.
Priyanka is currently in the US, where her recent announcement about her Hollywood debut Baywatch with Dwayne Johnson created a frenzy.
But Mr Jha denied that her professional commitments in the US were hindering promotions of Jai Gangaajal.
"She is all the time promoting. Today also, she gave an interview through Skype. She is tweeting all the time, what else is promotion? She has done print and media interviews for music channels, news channels even while sitting there. What would she have done if she was here? We are happy that she has been offered the kind of job that is the dream for everyone, so we are with her dreams," he said. (Also Read: Priyanka Chopra is a Maya Thagni in New Jai Gangaajal Song)
"As far as her responsibilities are concerned, she is doing the best that is possible. Unfortunately in our film, there is no dance or item number in uniform that we could've made her do," he added.
Jai Gangaajal is releasing on March 4.