Priyanka Chopra's Zuhair Murad gown put her on most Best Dressed lists on Oscar day but at home, the actress was criticized by some for not wearing something Indian That Priyanka Chopra has packed more achievements into this last year than most lesser mortals do in 10 is fairly self-evident. Fashion-wise also, her 2016 has been glorious. Priyanka, 34, has been on several big ticket international red carpets since the year began, from the Oscars to the Emmys and much else in-between, and her wardrobe has had to keep up accordingly. The pleated red Jason Wu dress she wore to present an Emmy award was our favourite of her many fabulous outfits but it was the dress she wore to the Oscars, also as a presenter, that was massively validated by the Internet. Priyanka's strapless white Zuhair Murad gown, part of it sheer, was the seventh most searched Oscar red carpet dress, Google announced in its annual Year In Review lists. The actress' stylist in Los Angeles spoke to mid-day about how they picked the dress.
Priyanka told mid-day before her Oscar debut that she was "pretty stuck on white." White it was. Sophia Banks, who styled Priyanka in the lacy Zuhair Murad, explained to mid-day in an interview, "White was an on-trend colour. That dress felt like love at first sight."
It wasn't the first time Priyanka Chopra was wearing Zuhair Murad, a red carpet favourite with celebrities like Jennifer Lopez and others. She wore a black lace dress by the designer to a Grammys after-party last year, for instance. "She had actually worn a few Zuhair Murad outfits earlier, but none of them was a classic couture gown. We were able to select a bunch of looks straight off the Paris runway. But, somehow, our heart was set on this one," Sophia Banks told mid-day. Accessories were key. "Then came the jewellery - the Lorraine Schwartz diamonds worth millions of dollars which we agonised over, but it just looked perfect together," said Ms Banks. After the Oscars, Priyanka picked Zuhair Murad again for the White House Correspondents Dinner in May. 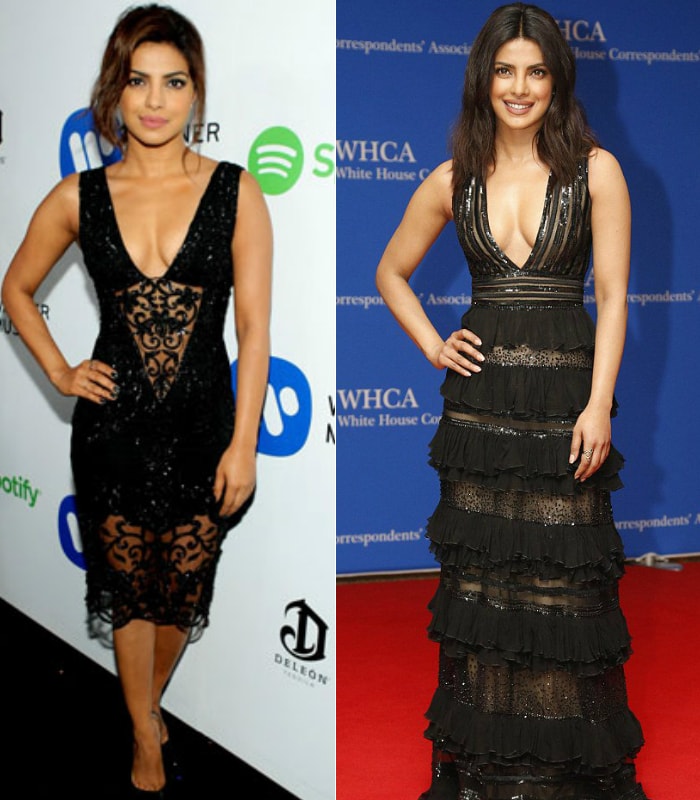 Picking an Oscar dress wasn't easy for an actress working on multiple projects - Priyanka's weekdays were devoted to filming her TV series Quantico, weekends to her Hollywood debut Baywatch. She was also on publicity duty for her Bollywood release Jai Gangaajal. "At Oscars, billions across the globe were going to watch her. We did fittings twice in Montreal. We took many photos, made alterations and discussed at length which dress would make it (to the Oscars)," Sophia Banks told mid-day.
The dress put Priyanka Chopra on most Best Dressed lists on Oscar day but at home, the actress was criticized by some for not wearing something Indian. "She often misses Indian clothes and accessories. But, her goal is to don top level international fashion. However, she is not someone who will lose connect with her roots," Ms Banks said to mid-day.
Last week, when her Oscar dress made it to the Google list, Priyanka Chopra tweeted:


So delighted that my Oscar outfit featured in @Google's #YearInSearch! Thank you for the love! #ZuhairMuradhttps://t.co/QYiNPYS7ripic.twitter.com/Qzr83boBPD

Priyanka Chopra can look forward to an equally packed 2017 - she's nominated for the People's Choice Awards again and has Baywatch releasing - and we'll be looking forward to more fashion hits.