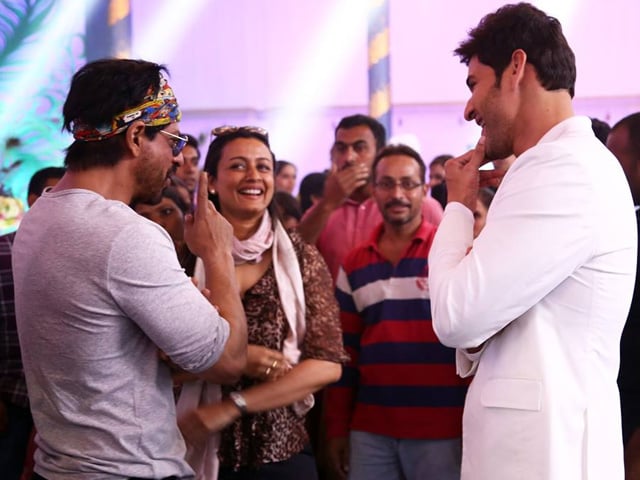 This image was posted on Instagram by Mahesh Babu

'Humbled' by SRK's gesture, Mahesh Babu shared images from the meeting on social media. He is married to Bollywood actress Namrata Shirodkar, who can be seen sharing a laugh with SRK in the pictures. Their 3-year-old daughter Sitara was there too, perched on her mother's lap

Shah Rukh Khan, who is currently filming for Dilwale in Hyderabad, paid a visit to Telugu superstar Mahesh Babu on Saturday, on the sets of his upcoming family drama Brahmotsavam. And "The entire cast and crew were thrilled," said the Srimanthudu star. 'Humbled' by SRK's gesture, he shared images from the meeting on social media.


It was a pleasure meeting Shah Rukh Khan on our Brahmotsavam sets today. The entire cast and crew were thrilled.. Thanks Sir.. Humbled :)

Within a matter of a few hours, the Chennai Express star took to Twitter to say: "It was my pleasure actually." That's not it. SRK has more plans up his sleeve.


@urstrulyMahesh it was my pleasure actually. And ur crew was so warm and welcoming. Will drop in again and have some Hyderabadi food with u.

Following a 'Thank you' note to SRK, the 40-year-old star revealed a few more moments from his encounter with the King Khan:


Here are a few more pictures from this afternoon for you all...

The Businessman star is married to Bollywood actress Namrata Shirodkar, who can be seen sharing a laugh with SRK in the pictures. Their 3-year-old daughter Sitara was there too, perched on her mother's lap.
SRK, who was in casuals, sported a comic strip printed bandana along with his blue sunglasses, which have featured in most of his Dilwale snapshots.
The Dilwala recently made a date with world's top-ranked female badminton champ Saina Nehwal with the venue being Hyderabad again. He picked a rather funny caption on Instagram to share pictures of the two of them posing with their racquets. (Also Read: Love All: How Shah Rukh Khan Beat Saina Nehwal at Her Own Game)

Directed by Rohit Shetty, Dilwale will reunite the classic Bollywood jodi of Shah Rukh and Kajol after Karan Johar's 2010 movie My Name is Khan.
The romantic drama also stars Varun Dhawan and Kriti Sanon in the lead roles while Boman Irani and Vinod Khanna will also appear in key roles. Dilwale is set to release on December 18. Fan and Raees are also two of Shah Rukh's upcoming movies. (Also Read: This is What Makes Shah Rukh Khan 'Arrogant')
Brahmotsavam, which also features features Telegu actors like Kajal Aggarwal, Samantha Ruth Prabhu and Pranitha Subhash in the lead roles, is scheduled to hit screens next year.