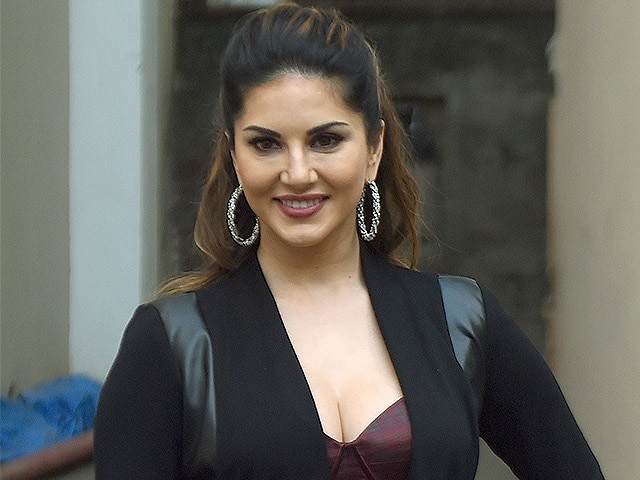 Sunny Leone pauses after an interview with a news channel on January 15. Image courtesy: AFP

"When I first got into the industry it was definitely not a good feeling when people are not so happy about your choices in life," Ms Leone told AFP during an interview in Mumbai. "But as time has gone by, especially over the last six months, I've gotten to know and I've gotten to meet some amazing celebrities," she added

Bollywood actress Sunny Leone has long faced the wrath of the country's social conservatives for her porn-star past, but she remains determined to carve a career in Hindi movies even as fresh controversy erupted this week.
The Canadian-born actress, whose adult films include Descent into Bondage and Costumed Damsels in Distress, said making the transition to Indian cinema had been difficult but she now felt at home in Bollywood.
"When I first got into the industry it was definitely not a good feeling when people are not so happy about your choices in life," Ms Leone told AFP during an interview in Mumbai. "But as time has gone by, especially over the last six months, I've gotten to know and I've gotten to meet some amazing celebrities and it's a journey," she added.
The 34-year-old, the most searched celebrity on Google in the country for the last three years, has often drawn controversy in a country which is deeply conservative and religious.
This week, social media erupted in sympathy for Sunny Leone after she calmly faced down what many felt was a misogynistic grilling about her past by journalist Bhupendra Chaubey on his top-rating TV show, during which he even suggested she was linked to the increase in India's pornography viewing.
But in a testament to the increasing acceptance of her by the Bollywood establishment, big name stars such as Aamir Khan, Rishi Kapoor, and Anushka Sharma voiced support for the actress on Twitter.
'Penthouse Pet' to Bollywood
A subsequent video on Facebook of Sunny Leone expressing her gratitude for the support has been viewed more than a million times.
The actress, whose real name is Karenjit Kaur Vohra, was born in Ontario, Canada to Indian Sikh immigrants in 1981.
She moved to India five years ago after a successful career as a porn actress, which included being named "Penthouse Pet of the Year" in 2003.
She got her first break in India in 2011 when she appeared on Celebrity Big Brother-inspired local reality TV show Bigg Boss before making her Bollywood debut the following year.
Sunny Leone has now appeared in more than eight Indian movies and is set to star in a new risque comedy called Mastizaade which will hit screens on January 29.
At a film studio in the north of Mumbai, home to Bollywood, Sunny Leone is clearly proud of the progress her career is making.
"When I came here there were a lot of people who didn't want me here and there were a lot of people who had lots of crazy things to say about me," she said.
"But I have so many more fans who care about me, that like me, that like the movies that I've put out, or songs or photo shoots. I've had more supporters than I've had haters," she added.
Sunny Leone also admitted that one of her toughest moments was when a woman filed a police complaint against her in Mumbai last year for "promoting obscenity and destroying Indian culture and society".
Police are obliged to register a case when such complaints are made and there have been reports of others.
"It's definitely something that did affect me. It was not fun at all," Ms Leone said of the complaint.
"Hopefully situations like that don't come up again because I'm not a part of that world anymore and I don't think it's fair to bring up things that have no merit at this point in time in my life."
'See me differently'
Sunny Leone said she felt social attitudes were shifting, with the next generation craving more of the risque films on offer in the West.
Apart from Ms Leone's Mastizaade, Bollywood is set to release two more with similar themes: Kya Kool Hain Hum 3 and Great Grand Masti.
Some commentators have complained that Mastizaade -- in which Sunny Leone plays the sexy bikini-clad Laila and the bespectacled geek Lily - objectifies women.
She advised those who feel that way: "Just don't watch the film", adding that the "movie's for adults only, it is adult humour."
But Sunny Leone was wary about being typecast and says she has lined up a couple of more serious roles.
"I think that transition also takes time and with each movie it's different," she explained.
"Is there sex appeal? Is there glamour? Yes of course but in the next couple of movies we'll find out if people like seeing me in a different way," she added.