How Suresh Raina Ended up Singing Playback For Meeruthiya Gangsters 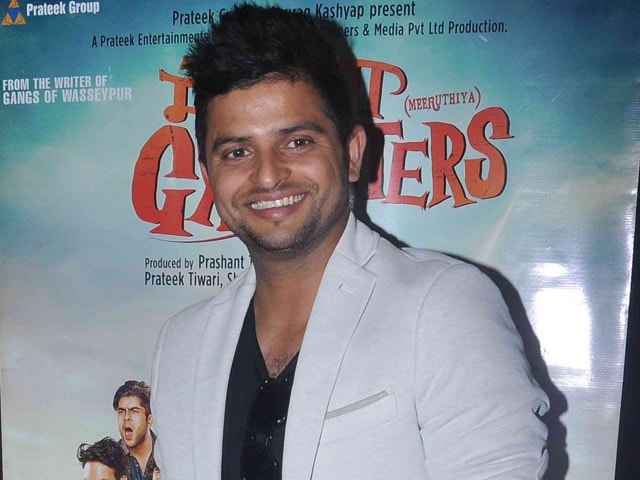 Suresh Raina, who has sung a song in Meeruthiya Gangsters launched the film's music at an event in Mumbai. He had earlier said he always had an inclination towards music, as his elder brother Naresh is a well-known singer of religious songs

Cricketer Suresh Raina, who has sung a song in upcoming crime-comedy film Meeruthiya Gangsters, launched the film's music at an event in Mumbai on September 7.
"I would like to congratulate all who all worked so hard for the film. I'm also from Uttar Pradesh and my wife is from Meerut. So when we were discussing the trailer of the film, we said how unique the film was," he said at event.
"I appreciate all these artistes in the film as all are from small towns and are entertaining the audiences and making them laugh with their brilliant comic skills," he added. (Also Read: A Filmy Second Innings For These Cricketers)
Suresh Raina sang a couple of lines from his romantic track Tu Mili Sab Mila, composed by Siddhant Madhav.
"I would like to give all credit to Siddhant who worked tirelessly on the song. I didn't have to do a lot and didn't have to sing like a professional singer since Siddhant managed everything really well by helping me out," he said.
He had earlier said he always had an inclination towards music, as his elder brother Naresh is a well-known singer of religious songs. He said he would do riyaaz (practice) with his brother and he was learning to play the saxophone.
It was his bond with producer Shoeb Ahmad which prompted Suresh to ask him whether he can sing for the film. "When seniors ragged us in boarding school, my singing helped me get out of the situation," he quipped.
Meeruthiya Gangsters, directed by Zeishan Quadri, stars Jaideep Ahlawat, Sanjay Mishra, Nushrat Bharucha, Aakash Dahiya, and Mukul Dev among others. It is set to hit the theatres on September 18.