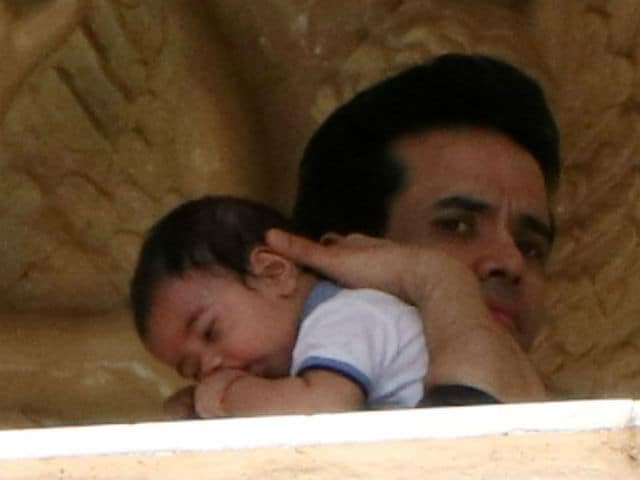 Tusshar Kapoor with Laksshya in Mumbai.

Actor Tusshar Kapoor has reportedly made a few plans to celebrate his son Laksshya's first birthday on June 1. Tusshar, who is currently busy with Rohit Shetty's Golmaal Again, told Mumbai Mirror that he will host a party for a few close friends and relatives on Laksshya's birthday. Tusshar, who wanted to keep his party plans secret from everyone, said: "I would like to keep it a secret. It'll be a close-knit group of people, who have got to know him, dropping by to wish him. I also want my family to share the moment with me so I have asked dad, mum, Ekta and my cousins to save the date.''
Of raising Laksshya, Tusshar Kapoor told Mumbai Mirror: "I have personally grown with Laksshya. My family and I feel blessed because he has truly enriched our lives. Since his arrival, there has been an outpouring of love and support from everyone."

Ekta Kapoor, who is busy making films and television soaps, said: "No matter how busy I am, I make it a point to spend at least half an hour every day playing with him."


When all u get is the superstars back on ur video

Meanwhile, tiny Laksshya has quite a fan following. Members of his fan club include Smriti Irani, Tabu and grandfather Jeetendra. These pics are proof.

Tusshar Kapoor's son was born through IVF and surrogacy in June last year. The 40-year-old actor had then said in a statement: "I am thrilled to be a father! The paternal instincts in me have been overpowering my heart and mind for some time now. Therefore, I am thrilled beyond words to have Laksshya, now the greatest source of joy in my life."
Tusshar Kapoor was last seen in 2016's Mastizaade and his upcoming film is Golmaal Again co-starring Ajay Devgn, Tabu and Parineeti Chopra.