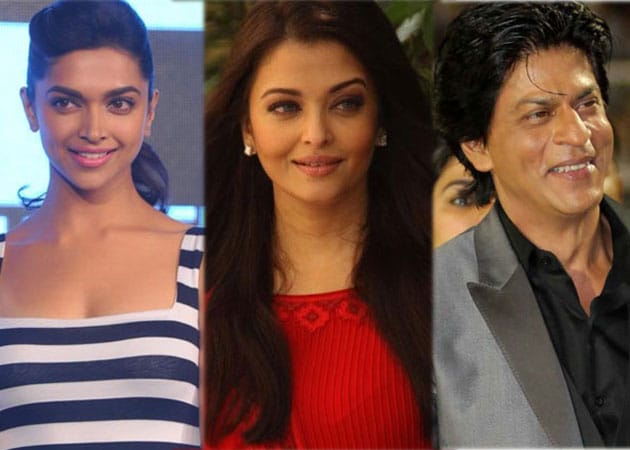 While Deepika is in Maldives, Aishwarya will head to Dubai with Abhishek and Aaradhya, and Shah Rukh Khan will be flying to Phuket with family.

Most Bollywood stars are currently in holiday mood. Several of them flew out of Mumbai to celebrate Christmas, while the rest will be taking off soon to usher in the New Year. A look at who is heading where.

Most Bollywood stars are currently in holiday mood. Several of them flew out of Mumbai to celebrate Christmas, while the rest will be taking off soon to usher in the New Year. A look at who is heading where.
Deepika Padukone: The actress has taken a break from work to spend time with her family. She flew to Maldives with her dear ones on Tuesday (December 24, 2013) and is likely to return just before December 31. Deepika will bring in the New Year with her friends in Mumbai.
Shah Rukh Khan: He will be flying to Phuket, Thailand, with his family. After a long time, they will all be holidaying together.
Shahid Kapoor: The actor has been in a celebratory mood post R...Rajkumar. His party mode continues as he is headed for Los Angeles with friends where he will usher in 2014 and make merry.
Sonam Kapoor: She has been shooting in Rajasthan for the remake of Khubsoorat from where she will head to Goa with pals after a short halt in Mumbai.
Akshay Kumar: He will also be in Goa for the New Year with his wife Twinkle, and children -- Aarav and Nitara.
Aamir Khan: Like every year in December, the actor is ready to pack his bags and head to his house in Panchgani along with his wife Kiran Rao, son Azad and his group of close friends. The Panchgani house is like his vacation pad.
Madhuri Dixit: She is expected to leave for Singapore with her husband Shriram Nene and kids Arin and Ryan to usher in the New Year.
Kareena Kapoor-Saif Ali Khan: They will take off to their favourite destination, Gstaad in Switzerland. The couple love to spend time in a chalet in the snowcapped mountains.
Karan Johar: The filmmaker will be in Dubai with his pals. His Student Of The Year actors Varun Dhawan and Alia Bhatt will be in Mumbai, but have taken time off on New Year's eve.
Aishwarya Rai-Abhishek Bachchan: They will be in Dubai on New Year with their tot Aaradhya.
Sanjay Dutt: The actor who is out of jail on parole will be celebrating the New Year with his ailing wife Maanyata and kids Shahraan and Iqra.