For his first picture on Twitter, the veteran filmmaker shared a family picture of the Roshans, starring Hrithik and his sons - Hrehaan and Hridhaan, daughter Sunaina, wife Pinky and brother Rajesh along with other family members 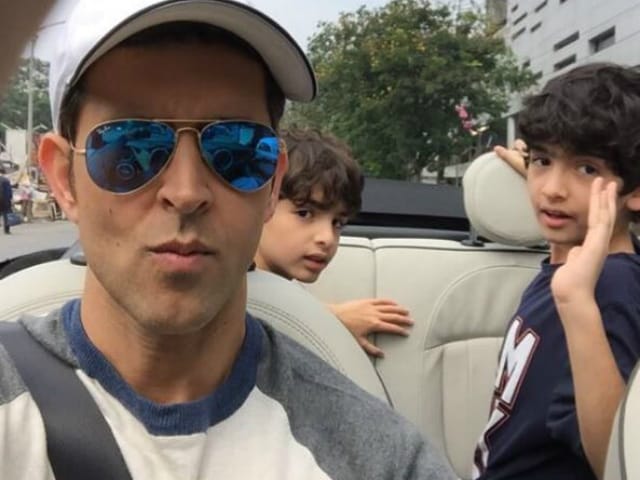 Hrithik Roshan has more than one reason to put on his party hat and let his hair down this October. First, the teaser of his upcoming film Kaabil released on Friday, second, it is his mother Pinky Roshan's birthday this month, and third, his filmmaker father made his debut on Twitter last week.
For his first picture on Twitter, the veteran filmmaker shared a family picture of the Roshans, starring Hrithik and his sons - Hrehaan and Hridhaan, daughter Sunaina, wife Pinky and brother Rajesh along with other family members.
Fans were in for a treat as Hrithik welcomed his father by re-tweeting this picture.


1st launch of Kaabil, 1st day on Twitter and 21st birthday of pinky.What a day.(glad atleast on d outside we look like a nice normal family) pic.twitter.com/fzQyINDAoQ

Your Deja vu is justified for this picture shared on Hrehaan's birthday:

Hrithik co-stars with Yami Gautam in Kaabil, the teaser of which was chill-inducing. Both Hrithik and Yami play characters who are visually impaired in the Sanjay Gupta-directed and Rakesh Roshan-produced film. The film also stars Ronit and Rohit Roy, and Girish Kulkarni. Here's the teaser:

Kaabil is set to release on January 26, when it is expected to clash with Shah Rukh Khan's Raees.
The Hrithik-Rakesh Roshan collaboration will return with a bang! as a fourth instalment in the Krrish series of films. This is how the announcement was made:


Ganpati blessings for KRRISH4 :)) hope everyone is enjoying the festivities. Love to all. pic.twitter.com/g2g8K489AO

Hrithik Roshan, 42, reprises his role as the caped and masked superhero in Krrish 4, which is scheduled for Christmas 2018 - that's two Christmases from now - but it appears the date is already booked for another Shah Rukh film. SRK will play a dwarf in a movie directed by Aanand L Rai, which releases December 21, 2018.