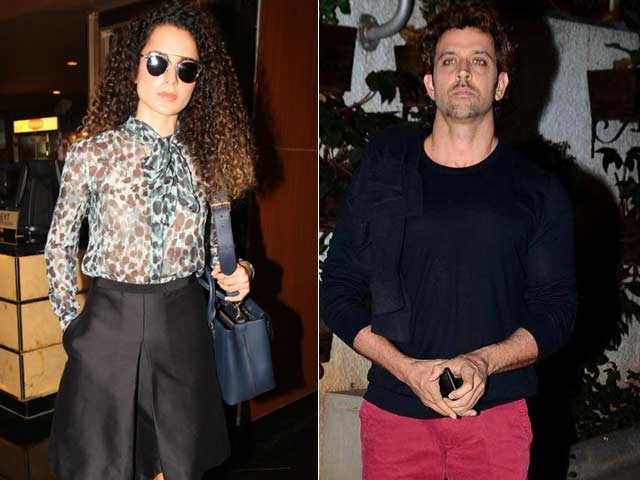 Proceedings into the ongoing legal battle between Bollywood actors Hrithik Roshan and Kangana Ranaut have been stalled as she has not yet recorded her statement to assist in the investigation, Hrithik's counsel claimed. (Also Read: Did Hrithik Roshan Lie to Police, Asks Kangana Ranaut in Letter)
Actress Kangana Ranaut is yet to record her statement following a complaint lodged by Hrithik which says that a fake email-ID has been created and an impostor has been operating it under his guise.
Hrithik's lawyers told IANS, "Instead of giving so many media statements, they (Kangana) should record one official statement with the cyber crime cell which will really help the investigation. They are clearly more interested in media wars than anything else. The entire process of investigation is stalled because they haven't officially recorded their statement with the authorities."
Reportedly, Hrithik has already recorded his statement in the case. The cyber crime team has been trying to get Kangana's statement but she has so far not done so.
According to reports, the cyber crime team was to record Kangana's statement on Monday but the actress's counsel had a different take on the issue.
"I have been receiving calls from media persons since last two hours. They have been told by Hrithik Roshan's PR team that police is coming to meet Kangana today (Monday). That's a blatant lie as no one is visiting Kangana, as has been communicated by Hrithik's team," the counsel said.
"My client is not a coward to disappear suddenly. We have always been handling the matter legally and without any fear. Hrithik's PR team is just misleading media persons for obvious reasons.
"He should rather concentrate on acting on my counter-notice or responding to it, as it has been more than 45 days since he received it. Such acts of misleading media persons shows acts of desperation. Hrithik never bothered about any imposter in the last about two years. How has it become so important now. Hrithik did what he had to do, now he should wait patiently as law will take its own course," the counsel added.
The controversy began earlier this year after Kangana hinted at Hrithik being her 'ex' when she said in an interview that she failed to understand 'why exes do silly things to get your attention'.