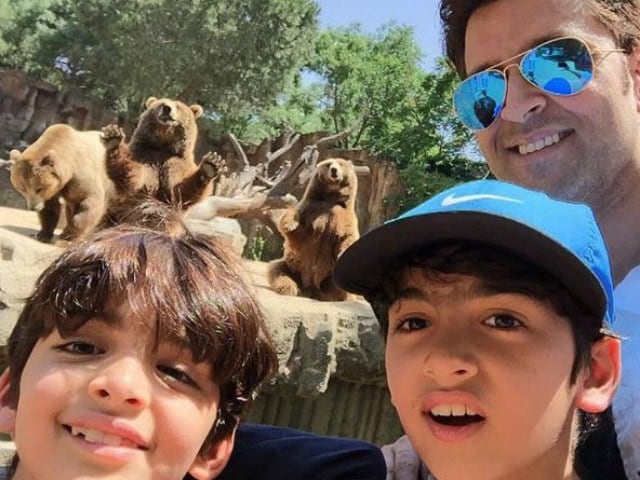 This image was posted on Instagram by Hrithik Roshan

In the picture, Hrithik and his sons Hrehaan and Hridhaan give off major Kala Chashma vibes. And swag level? Simply off the charts. Hrithik explains his smile, which is clearly wider than his two sons, in the caption of the picture he Instagrammed. Meet the men in black

A picture posted on Instagram is getting major love, as it often happens on a Thursday - only, this isn't a throwback. Hrithik Roshan's photo of himself with sons Hrehaan and Hridhaan is beyond adorable and is giving major Kala Chashma vibes. Swag level? Simply off the charts.
Papa said jump. How high, said Hrehaan and Hridhaan.
The end result was clearly worth it but Hrithik had a hard time making this moment happen. He explains just why his smile is so much wider than the boys' in the caption of the picture he shared. Meet the men in black:


They look good? Then the three hours I spent trying to convince them into evening wear was worth it. #allswellthatendswell #imitationandflattery

Hrehaan and Hridhaan are Hrithik's sons with ex-wife Sussanne Khan. They often accompany him abroad - last spotted at the IIFA Awards in Spain and a post-show holiday in Africa - and are the subject of Hrithik's Instagram posts. We bring you the best of them:


Don't try those puppy eyes on me son, I TAUGHT you that trick. You chose it, you have it. #nocompromisesonicecream #noexchange

Well they're still at the stage where they want to emulate everything I do. Better enjoy it. #athleticmornings #notimelikethepresent

When you have no answer to their non-stop questions but still want to look cool. #dadhacks #trustmeitworks #notallhugsarethesame

There's only one rule to learning - start early and never stop. #venetianmaskmaking #yesIknowtheydiditbetter