Hrithik Roshan tweeted: "Dear Tommy, I don't wear you, neither do my kids endorse you" 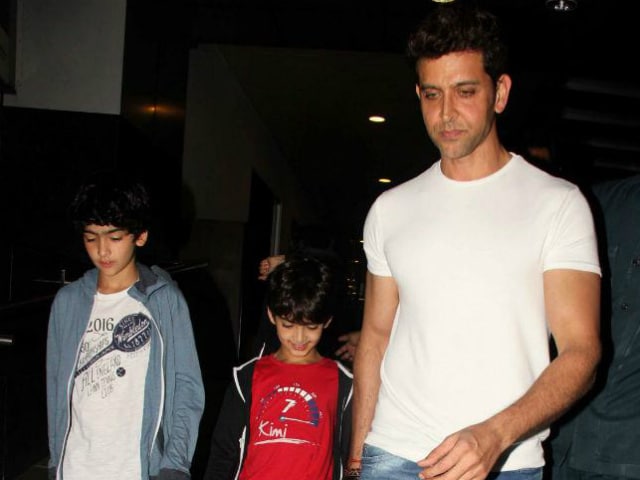 Hrithik Roshan and his sons, Hrehaan, 10, and Hridhaan, 8, photographed in Mumbai

Actor Hrithik Roshan has lashed out at clothing brand Tommy Hilfiger in a tweet over what appears to be an unauthorized advertisement featuring him and his two sons. On Thursday night, Hrithik tweeted: "Dear Tommy, I don't wear you, neither do my kids endorse you. If you have lost your spine, I have a great team to help you find it. Please (Hil)figure yourself out." He appended an image of what looks like an advertisement for Tommy Hilfiger Kids, in which the 43-year-old actor gambols with Hrehaan, 10, and Hridhaan, 8, dressed in matching outfits. "Adorable Hrehaan and Hridaan Roshan in Tommy Hilfiger Kids," reads the purported advert. Here's Hrithik Roshan's angry tweet:


Dear Tommy.I dont wear u, neither do my kids endorse u.If u hv lost ur spine I hv a great team 2help u find it.Please (hil)figure urself out pic.twitter.com/QMB2h9Gm0y

The brand has not yet responded. It's unclear whether the advert is genuine and where Hrithik came by it.
Many pictures of Hrehaan and Hridhaan are available on their father's Instagram, among them photographs of holidays abroad. The image used in the supposed advert brings to mind this photo that Hrithik posted some months ago:


They look good? Then the three hours I spent trying to convince them into evening wear was worth it. #allswellthatendswell #imitationandflattery

Hrithik Roshan and Sussanne Khan married in 2000 and divorced in 2014. The couple reunited for a family holiday to Dubai in December and Sussanne was spotted at the premiere of and parties for Hrithik's last film Kaabil, which released on January 25.
Kaabil starred Hrithik Roshan as a visually-challenged man plotting revenge after his wife was raped and kidnapped and then killed herself. The film co-starred Yami Gautam, Ronit Roy and his brother Rohit Roy. Sanjay Gupta directed with Hrithik's father Rakesh Roshan producing. The Roshans will begin work on the fourth Krrish film next.