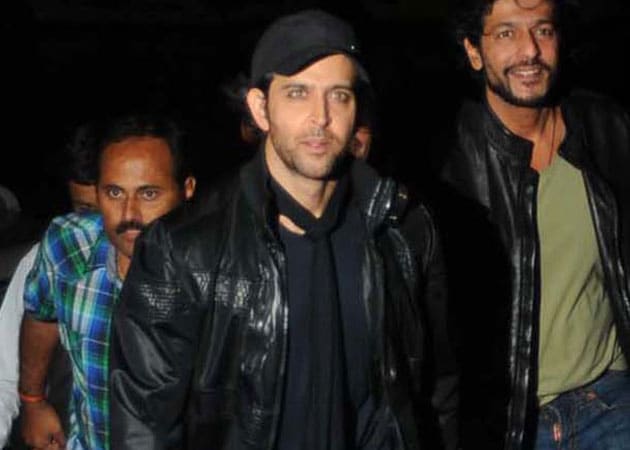 Hrithik Roshan underwent a brain surgery in Mumbai on July 7, 2013.

A head injury during the shoot of Bang Bang in Phuket is what landed Hrithik Roshan at the Hinduja hospital, says his father and filmmaker Rakesh Roshan.

A head injury during the shoot of Bang Bang in Phuket is what landed Hrithik Roshan at the Hinduja hospital, says his father and filmmaker Rakesh Roshan.
The 39-year-old underwent a successful brain surgery at Mumbai's Hinduja Hospital on Sunday afternoon.
(Read: Hrithik Roshan's brain surgery successful)
Rakesh Roshan told reporters: "He was shooting for Bang Bang in Phuket, Bangkok. He was doing a stunt where he had to put a jet on his feet and go 30 feet high in the sky and then dive down in the water."
"So when he rehearsed, he fell the wrong way and banged his head a bit, which he didn't realise. That started his pain and he started taking pain killers, thinking it will get fine in three to four days because something similar had happened during Kaho Naa... Pyaar Hai also."
The pain subsided, but only to return a month later.
"Hrithik finished shooting in the next eight days and he came to Mumbai. The headache was still there, so we had a CT scan done but nothing showed in it. Then he was on medication. So the pain decreased, but it started increasing gradually in the past four weeks," said the senior Roshan who has just finished shooting Krrish 3 with his star son.
It was on the night of July 5, a day before he was scheduled to fly to Prague, the Czech Republic, for the next schedule of Bang Bang, that Hrithik complained of severe pain.
"Friday night (July 5) he told my wife (Pinki) that 'I am not comfortable and something is wrong inside'. So we took another CT scan and MRI. On Saturday morning (July 6) we got them done and then we were told there is a blood clot," said Rakesh Roshan.
Hrithik was diagnosed with chronic subdural haematoma and was admitted to the Hinduja Hospital on July 7 evening, and next day he was operated upon.
Being directed by Siddharth Anand, Bang Bang features Katrina Kaif opposite Hrithik. The film is expected to feature some brilliant stunt sequences and is being shot across Europe.
The shoot of the third schedule of the movie has been moved forward for Hrithik.