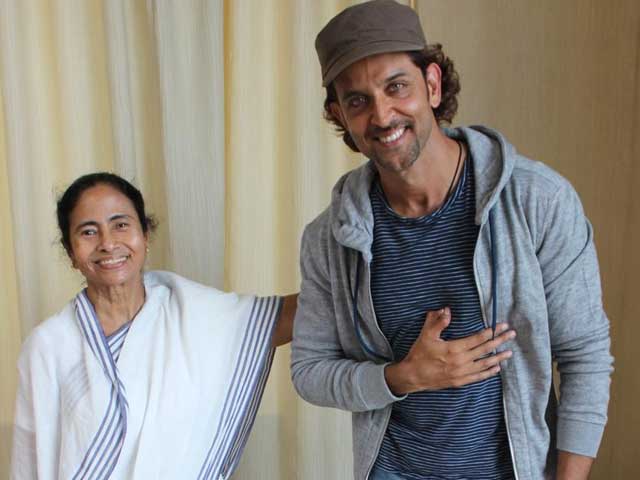 This image was posted on Twitter by Mamata Banerjee

"Whenever I see her smiling face, she is just full of love," said Hrithik

"Whenever I see her smiling face, she is just full of love. First of all, I love this city and I know how much I love her. So, anything for her. I will be here for the film festival and will try to help in every way I can," Hrithik told the media after the meeting at the state secretariat Nabanna in Howrah.

Hrithik was in Kolkata to perform at the Indian Premier League (IPL) inaugural on April 7.

Apart from the film fest, Ms Banerjee also invited the star to a Kolkata Police programme.

She also requested the actor to shoot in Kolkata.

"Yes, I will come here and didi (elder sister in Bengali) will be there to give the first clap of the first shot," the actor said.

An elated Ms Banerjee wished good luck to the actor and his team for the opening.

I was happy to meet @iHrithik. We had a nice round of discussions. My best wishes to him and his team pic.twitter.com/Ls8VBbOLWz

The actor also took to the microblogging site to express his profound love for the city and recalled his part-Bengali heritage.

"City of joy, I love you!! So much love here in Kolkata ! My dida (grandmother) would have been so proud.. Thank you all," the star posted on Twitter on Tuesday.

Hrithik, Anushka Sharma and Shahid Kapoor are set to stage a power-packed performance for spectators at the gala opening ceremony at the Salt Lake Stadium.