The challenge, however, appears to have been taken very, very seriously by many, including Jacqueline herself, actor Hrithik Roshan, TV stars Divyanka Tripathi and Mouni Roy and producer Ekta Kapoor 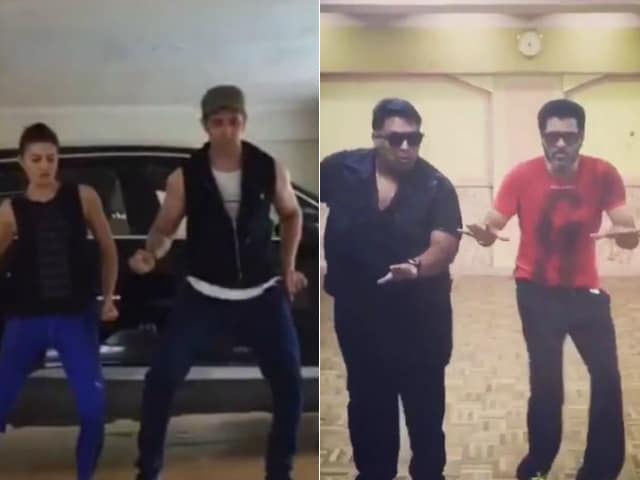 Stills from videos Instagrammed by jacquelinef143.

Hrithik Roshan is no stranger to film-related challenges - he issued a set of these for his 2014 film Bang Bang! and was rewarded by videos from Ranveer Singh and Priyanka Chopra that went viral. Cut to 2016 and Hrithik, 42, is paying it forward.
Last week, A Flying Jatt director Remo D'Souza asked for videos of best dance moves set to Beat Pe Booty, a song from the film featuring lead actors Tiger Shroff and Jacqueline Fernandez.
The challenge appears to have been taken very, very seriously by many, not just by Hrithik but also by Jacqueline herself, TV stars Divyanka Tripathi and Mouni Roy and producer Ekta Kapoor.
Challenge accepted!
It fits that Hrithik should ace the Beat Pe Bootyroutine because he's been cited as one of the dancefloor inspiration for Tiger Shroff, no mean mover himself:


@tigerjackieshroff @remodsouza told you guys I had a big surprise!! Thank you @hrithikroshan #krrish doing the #beatpebootychallenge if you guys wanna be part of it just hashtag beatpebootychallenge! Can't wait to see what you got!! #bringiton thanks @rahuldid for shooting this for me

In their video, Divyanka, Mouni and Ekta begin with the rehearsed moves before breaking into freestyle and a lot of jumping around:

The Mohan sisters - Neeti, Mukti and Shakti - were also fabulous in their own way:

But only one man can give Hrithik Roshan competition. Here he is - the rubber-jointed Prabhu Deva with choreographer Ganesh Acharya: