Hrithik Roshan Wants Sonakshi Sinha's Autograph For Being An 'Inspiration'

"I usually never take an autograph from anyone. But today I want an exclusive autograph from her for being an inspiration in terms of acting and dancing," said Hrithik 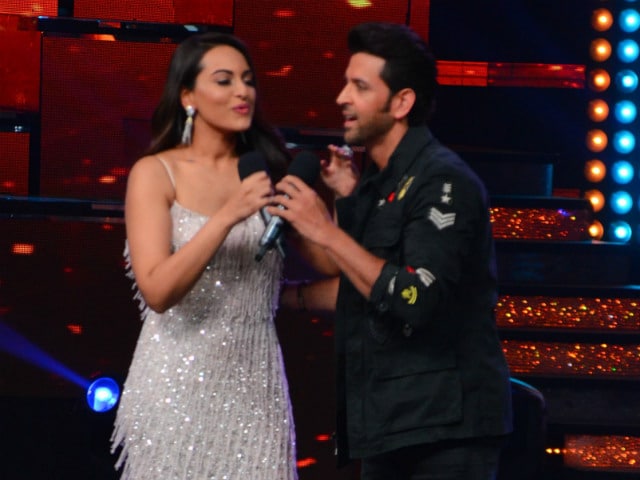 There a new 'inspiration' in actor Hrithik Roshan's life. The Kaabil actor has found an inspirational figure in actress Sonakshi Sinha, and said that he "looks up to her," reported DNA. Hrithik recently appeared on an episode of dance reality show Nach Baliye 8 and grooved with Sonakshi, who is one of the judges on the show. Hrithik, who is a star himself, admitted to being Sonakshi's fan and said that he wants an "exclusive" autograph from the actress, reported DNA. "I usually never take an autograph from anyone. But today I want an exclusive autograph from her for being an inspiration in terms of acting and dancing," DNA quoted the Mohenjo Daro actor as saying.
Hrithik and Sonakshi have not shared screen space yet but fan-boy Hrithik revealed that he has already watched all of Sonakshi Sinha's films. "Sonakshi is one of the great dancers in the industry, her songs are amazing. I've watched all her movies, she acts gracefully and is herself in all her characters. I really look up to her and learn a lot from her," DNA quoted Hrithik as saying.
Meanwhile, Sonakshi continues to be a huge fan of the Kaho Na... Pyaar Hai star for almost two decades now, as revealed by the actress on Nach Baliye 8. "Sonakshi recalled that being a star kid she was always surrounded by celebrities and never needed to ask anyone for an autograph. But when Hrithik's debut film released, she loved it so much that she'd send her house-help over to the Roshans every day to get her an autograph, which, despite her dogged efforts, failed to bear fruit," Ahmedabad Mirror quoted a source from the sets as saying.
Sonakshi Sinha judges Nach Baliye 8 along with choreographer Terence Lewis and director Mohit Suri and is also awaiting the release of Noor, in which she features as a bumbling journalist and co-stars with Purab Kohli. Directed by Sunhil Sippy, Noor is based on Karachi, You're Killing Me!, a novel by Saba Imtiaz. Noor is scheduled for April 21.
Last seen in Kaabil, Hrithik will reprise his role as the caped superhero in the fourth instalment of Krrish.