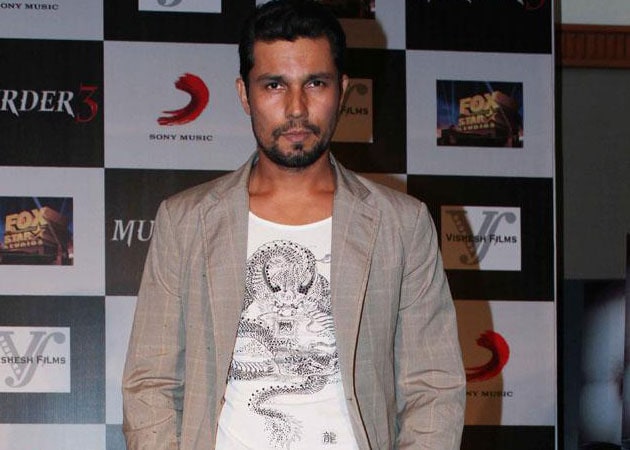 For Randeep Hooda the path to success was not easy. After making his debut in Monsoon Wedding in 2001, it took him four years to bag his next project. But now, when he has got a place for himself in the industry, he is not bragging.

For Randeep Hooda the path to success was not easy. After making his debut in Monsoon Wedding in 2001, it took him four years to bag his next project. But now, when he has got a place for himself in the industry, he is not bragging.
"Right now it all looks fine, but that was not the case some years back. It was bleak, dark. The success right now is just a step in my journey. I don't think I have reached my destination yet," Randeep told IANS.
"I am just accumulating more and more. All my choices of work are half chances, and my half chances have been working well, but I am not over the moon and shouting from rooftop about it because when I was down and out, I wasn't grovelling. So I think I have found a balance of not getting too elated with success and not too disappointed with failures," added the 36-year-old.
Milan Luthria's Once Upon A Time In Mumbaai in 2010 came as a breakthrough in Randeep's career, when he was appreciated for his performance.
It was followed by his performance in Saheb, Biwi Aur Gangster in 2011 and three releases last year - Jannat 2, Jism 2 and Heroine - gave his career graph a push. Even his cameo in "Cocktail" was noticed.
He too admits that his "last six films have been successful whether I was in lead role, a small role. And it has been a good run for me."
But he has bigger plans.
"I want to do lots of things...I have bigger dreams. I want people not only in India, but also across the world, wanting to see my work and appreciating it. Hopefully, I will reach out to entire world," said Randeep, who is sleep deprived nowadays.
"I am doing double shifts and because of lack of sleep I do forget my dialogues on the sets, but it has never been work for me, I really enjoy it, so no issues," he said.
Meanwhile, Randeep is looking forward to his next film Murder 3, in which he will be seen as a photographer. Releasing Friday, the movie will see him romancing Aditi Rao Hydari and Pakistani actress Sara Loren.
Directed by Mukesh Bhatt's son Vishesh, movie has ample erotica, says Randeep.
"I play a talented fashion photographer in the film. There is more than enough of erotica in the movie because it has to go with the theme of Murder (franchise) of having great music, story and erotica," he said.