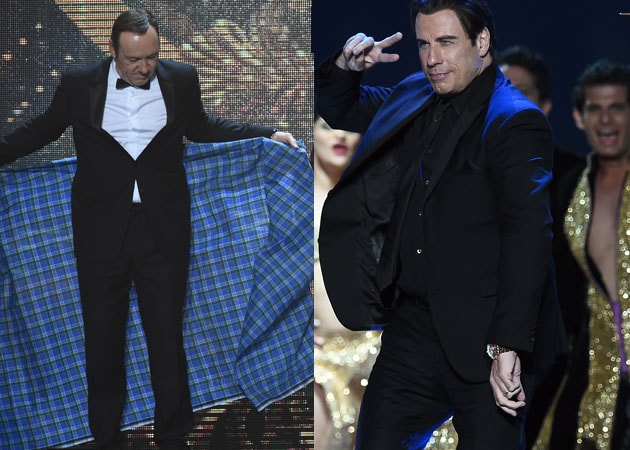 Kevin Spacey performing the Lungi Dance and John Travolta doing the famous ?I see you? move from Pulp Fiction.

The Indian film industry's top award show sailed into Tampa on Saturday with a pirate-themed opening musical number and celebrities ranging from Slumdog Millionaire star Anil Kapoor to John Travolta and Kevin Spacey.
Before a crowd of some 20,000, the International Indian Film Academy awards started with the entrance of actors aboard a float built like a pirate ship -- a nod to Tampa's love of pirate-themed parties. The show informally known as the "Bollywood Oscars" was being held in the United States for the first time. The show was recorded and will be broadcast in June. IIFA says, some 800 million people worldwide are expected to watch the event.
Co-hosts Shahid Kapoor and Farhan Akhtar, dressed in swashbuckling outfits, demanded the key to Tampa from Mayor Bob Buckhorn, who was sitting in the front row at the city's NFL stadium. (Also read: "IIFA thumakda: John Travolta dances with Hrithik, Priyanka )
"I will give you this key if and only if you entertain us," said Mayor Buckhorn, after which Shahid and Farhan climbed onstage and proceeded to have a mock sword fight.
But it was Travolta that made the crowd come to life. Indian star Priyanka Chopra pulled him onstage and Travolta did some signature moves from his 1994 blockbuster film Pulp Fiction.
Later, actor Hrithik Roshan presented Travolta with an award for Outstanding Achievement in International Cinema, declaring the two-time Golden Globe winner "the coolest of them all." "I'm honored. I'm humbled," Travolta said.
Hollywood actor and two-time Academy Award winner Kevin Spacey also wowed the crowd. He presented actress Deepika Padukone with the award for Entertainer of the Year. (Also read: "Kevin Spacey's Lungi Dance with Deepika Padukone steals the show at IIFA 2014 )
Deepika and the co-hosts persuaded Spacey to don a Lungi -- a sarong -- and dance to a wildly popular song called the Lungi Dance, which was written for the movie Chennai Express.
Before the show started, Travolta, Spacey and dozens of Indian film stars walked slowly past hordes of international media outside the stadium. Unlike the Academy Awards, IIFA uses a green carpet instead of a red one.
Like a Bollywood movie, the awards show was long, colorful and filled with spectacular song-and-dance numbers. The show started about an hour and a half late, and ended about 3 am EDT.
The opening musical sequence combined elements of pirates, underwater creatures and football cheerleaders. Other songs were medleys of movie hits, with Cirque du Soleil-type acrobatics.
Some of India's hottest movie stars received awards during the ceremony. While many were similar to Oscar-style accolades (best actor, best picture), others took a different twist (best villain, best performance in a comic role).
Bhaag Milkha Bhaag, a film about the life of Indian track and field Olympian Milkha Singh, was the big winner of the night. The 84-year-old Milkha Singh was in the audience on Saturday.
The movie won the best story award, best director and best picture. It also won nine technical awards during a separate ceremony in Tampa on Friday.
Farhan Akhtar (the co-host) won best male lead actor for his starring role in Bhaag Milkha Bhaag, and Deepika Padukone won best female lead actor for her role in Chennai Express.
The awards ended four days of well-attended events, much to the delight of Tampa tourism authorities and lovers of Indian film and culture.
Launched in 2000 at the Millennium Dome in London, the annual IIFA awards have traveled around the world in the hopes of exposing the genre to various audiences and opening trade markets.
"Bollywood" is the term for the film industry based in Mumbai (Bombay). Although it is used mostly to refer to the lengthy song-and-dance movies in the Hindi language, it's become somewhat of a catchall term for Indian films. IIFA organizers say that the Indian industry sells 3.6 billion movie tickets a year, about a quarter of them in the USA.