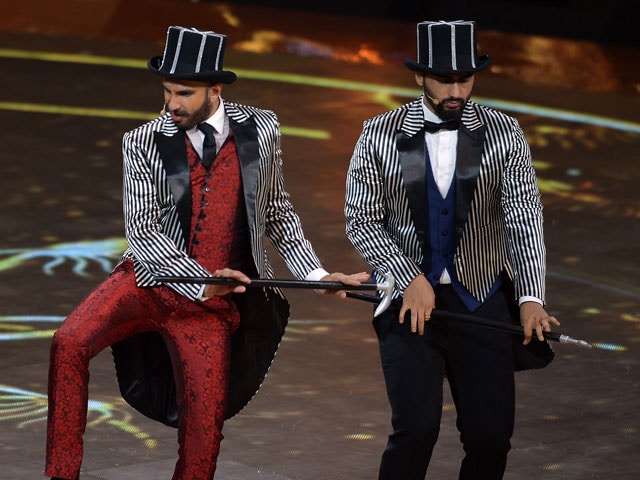 From making fun of superstar Aamir Khan's stand against the controversial comedy AIB Roast and breaking down into impromptu gigs along with actress Deepika Padukone, IIFA 2015 hosts Ranveer Singh and Arjun Kapoor did not leave any stone unturned to make the ceremony entertaining.
The Gunday co-stars did not spare any Bollywood actor or issues pertaining to the Hindi film industry during their high-octane hosting debut at the jampacked Putra stadium in Kuala Lumpur, Malaysia.
Ranveer and Arjun started their act by apologising for their stint on the expletive-laden AIB Roast, which had resulted in FIRs against both the actors. "We did something which offended many people. The gig involved us and a very famous director (Karan Johar). Many people said many things about it and FIR was also lodged against us. Politicians were angry," the duo said before jokingly adding, "We are very sorry about Gunday." (Also Read: At IIFA, Queen Wins Best Film; Shahid, Kangana Bag Top Honours)
They then sang a parody on Aamir, who had called the roast 'violent' rather than 'funny'.
"Hume maaf karna, O Aamir Khan. Hum kabhi nhi lenge Reema Lagoo and Farida Jalal ka naam," they sang. The actors, both 29, even turned rappers on stage with Baba Sehgal's song Mere baatein sun ke tum hasna nahi, where they poked fun at politicians and Aamir's reaction to the infamous show.
The actors, who made a grand entry on the stage with a pun on the film Karan Arjun, greeted the host country Malaysia with mentions of Bollywood films shot in the South-East Asian nation like Don, Fanaa, Humraaz and the more recent Roy.
The 2 States star took a jibe at the Arjun Rampal and Jacqueline Fernandez's film, which saw Ranbir Kapoor in a guest appearance, saying, "The film should be called 'Destroy' and not Roy."
Bombay Velvet, also starring Ranbir Kapoor, was also at the receiving end of the mockery as the hosts narrated kindergarten poem Johnny Johnny referring to the actor's character name Johnny Balraj in the film. They also said, "Ranbir should be named 'Roti' in the film because his co-star Anushka was called Rosie and that makes 'Rosie-Roti'. And they both took the Rosie-Roti away from Anurag Kashyap's pocket," they said.
Arjun even mocked his co-host Ranveer when his rumoured girlfriend Deepika Padukone's name was announced. "Woh Dekh Deepika, (Look, Deepika is there)," Arjun said. To which Ranveer replied, "Tab se wahi toh dekh raha hoon, (I am looking at her only)."
Deepika, whose Sabyasachi sari was coordinated with Ranveer's suit and hat, got shy and said "Stop it," when the camera was focused on her.
This was not the end, though. When Deepika came to receive the 'Woman of the Year' honour, Ranveer got down on his knees to flatter her with his romantic poetry. He also hinted at their relationship by singing the song Ram Chahe Leela from their 2013 film Ram Leela. Further, wen a fan of Deepika screamed 'I love you', Ranveer shot back at him and said, "Take it easy, bro".
Even actor Shahid Kapoor also became the butt of their jokes when they introduced the Haider star saying, "Where is Emraan Hashmi. He must not be visible because he played invisible man in Mr X. And our Shahid Kapoor is 'Mr Sab ka Ex'." Ranveer also asked Shahid whether he will call him for his wedding, the Haider star jokingly added, "No".
When Bipasha Basu turned up late for the event, Arjun asked, "Bipasha, why have you come Alone? Why don't you bring any Creature along with you?"