"I hope we will continue to make magic together," Ranveer Singh, who impressed audiences in his debut as a street-smart Delhi wedding planner in the romantic comedy Band Baaja Baaraat in 2010 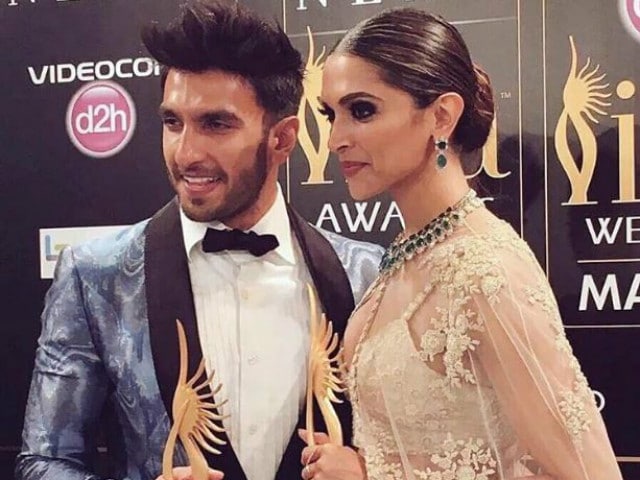 Indian historical epic Bajirao Mastani swept the International Indian Film Academy (IIFA) Awards early Sunday, taking home awards for Best Director, Best Supporting Actress and Best Male Actor for leading man Ranveer Singh.
The movie, which stars Ranveer as 18th century Maratha warrior Bajirao, picked up nine other technical awards at the International Indian Film Academy Awards, including for choreography and best cinematography.
"I am quite overwhelmed by all of this," the movie's director Sanjay Leela Bhansali said as he picked up his prize at the International Film Academy Awards being held this year in Spain for the first time.
"I don't want to thank anyone for this film. I think thank you is just not enough for this film," he added to applause from the 5,000-strong crowd gathered at Madrid's IFEMA Congress Centre for the event.
Bajirao Mastani made around Rs 3.5 billion ($52 million) according to industry estimates, and it has already picked up a number of awards this year.
Ranveer in turn said that he learned "how to be single-minded and uncompromising in the pursuit of excellence" by working with Mr Bhansali for the film.
"I hope we will continue to make magic together," the 30-year-old actor, who impressed audiences in his debut as a street-smart Delhi wedding planner in the romantic comedy Band Baaja Baaraat in 2010.
The Best Film award went to Bajrangi Bhaijaan starring Salman Khan, whose character embarks on a journey to reunite a mute six-year-old Pakistani girl stuck in India with her parents in Pakistan.
The movie was the biggest-grossing Bollywood film of 2015, earning around Rs 6.26 billion.
Sridevi, considered by many to be the first female superstar of Hindi cinema, was honoured with Lifetime Achievement Award.
The award show, which celebrates Bollywood films, takes place in a different city outside of India every year in the hope of luring new audiences to the genre.
Donkeys and footballers:
The co-hosts of the show, actors Farhan Akhtar and Shahid Kapoor, arrived on the stage for the start of ceremony - which got underway two hours behind schedule - riding donkeys.
They were followed by young men wearing football jerseys who did tricks with a ball with their heads and a mariachi band in white suits.
In the opening ceremony, actor Hrithik Roshan, accompanied by dozens of dancers, performed the flamenco-themed song Senorita from his 2011 film Zindagi Na Milegi Dobara, a road movie shot largely in Spain.
Spain is seeking to diversify its tourism base beyond the traditional northern European sun-seekers that account for the bulk of its visitors and officials hope hosting the awards will draw more Indian visitors.
Madrid city hall was illuminated with the colours of the Indian flag over the weekend in honour of the awards.
"Dear friends it is so nice to have you here. I am really, really pleased and at the same time very proud of your choice," Madrid mayor Manuela Carmena said at the start of the awards ceremony.
List of Winners:
Best Film: Bajrangi Bhaijaan
Best Performance in a Leading Role (Female): Deepika Padukone for Piku
Best Performance in a Leading Role (Male): Ranveer Singh for Bajirao Mastani
Best Direction: Sanjay Leela Bhansali for Bajirao Mastani
Best Story: K. V. Vijayendra Prasad for Bajrangi Bhaijaan
Woman of The Year: Priyanka Chopra
Best Performance in a Supporting Role (Female): Priyanka Chopra for Bajirao Mastani
Best Performance in a Supporting Role (Male): Anil Kapoor for Dil Dhadakne Do
Best Playback Singer (Female): Monali Thakur for Moh Moh Ke Dhaage
Best Playback Singer (Male): Papon for Moh Moh Ke Dhaage
Best Debut (Female): Bhumi Pednekar for Dum Laga Ke Haisha
Best Debut (Male): Vicky Kaushal for Masaan
Best Debut Jodi: Sooraj Pancholi and Athiya Shetty for Hero
Best Performance in a Comic Role: Deepak Dobriyal for Tanu Weds Manu Returns
Best Performance in a Negative Role: Darshan Kumar for NH 10
Best Music Direction: Amaal Mallik, Meet Bros Anjjan, Ankit Tiwari for Roy
Best Background Score: Sanchit Balhara for Bajirao Mastani
The broadcast of the awards attracts approximately 800 million viewers worldwide.
Launched in 2000 at the Millennium Dome in London, other cities to have hosted the glitzy event include Dubai, Bangkok, Singapore and Toronto. It was held in Kuala Lumpur, Malaysia last year.