Deepika Padukone, who's been away filming for her Hollywood debut, made a splash on Thursday wearing that most difficult of red carpet colours - red. 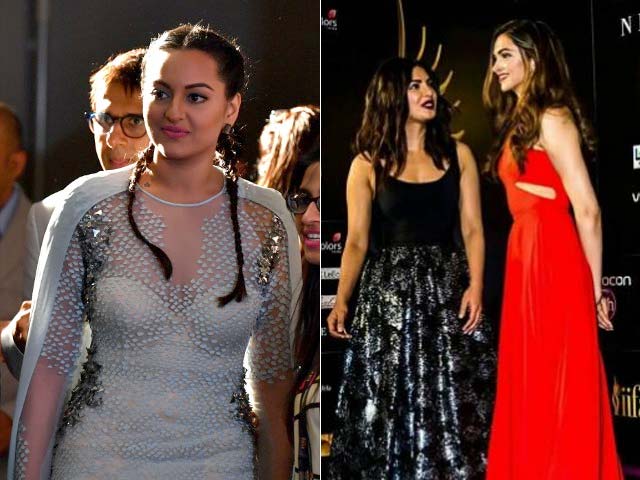 The fashion at the IIFA Awards in Madrid is making us very happy this Friday. Here are our five favourite looks so far. We haven't seen Deepika Padukone at a big ticket event in a while and her fiery IIFA outfit was a reminder of what we were missing. The 30-year-old star, who's been away filming for her Hollywood debut, made a splash on Thursday wearing that most difficult of red carpet colours - red. Deepika's scarlet Prabal Gurung dress and a pose borrowed from Angelina Jolie at the 2012 Oscars revealed a generous glimpse of leg. The actress teamed her gown with gold earrings from Outhouse and Giuseppe Zanotti shoes.


@deepikapadukone looks sensational in this red ensemble for the #IIFA2016 press conference! Stay tuned to see more of her looks from Madrid! -Team DP

Actress Priyanka Chopra attended the IIFA press conference dressed in a black top and metallic Marc Jacobs skirt, which she couldn't stop raving about on Instagram. She added black pumps by Christian Louboutin.

Channeling my inner mermaid/superhero in this stunner of an outfit by @rohitgandhirahulkhanna for #iifa2016! Styled by @alliaalrufai, hair and makeup by the staple @niluu9999 and @sheetalfkhan! #stylefile #edgy #blue #madrid

Actress Shilpa Shetty chose an orange jumpsuit by Shivan and Narresh which flattered her fit body. The clutch was from Furla.

Athiya Shetty killed it in a boho-chic Plakinger dress while checking out Madrid.

IIFA 2016 is being held in the Spanish capital from June 23-26. Apart from these gorgeous actresses, Bollywood celebs like Hrithik Roshan, Salman Khan, Shahid Kapoor, Karan Johar, Anil Kapoor and Fawad Khan are attending.