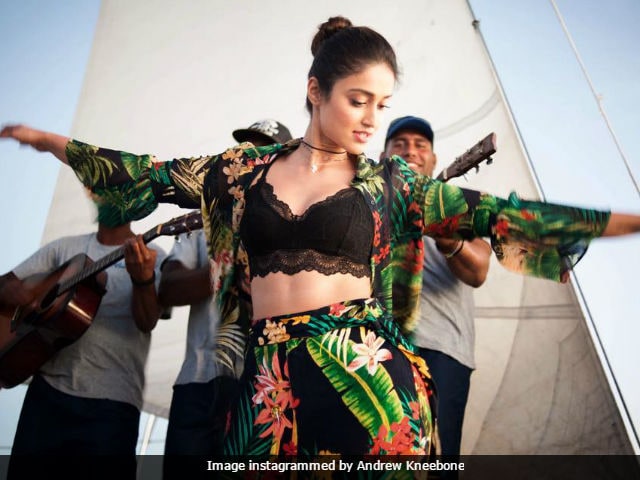 Actress Ileana D'Cruz is relaxing and working in style in Fiji with her boyfriend photographer Andrew Kneebone. Ileana shared pictures of herself at the sea and so has Andrew Kneebone. In the pictures Ileana Instagrammed, she captured her first attempt at jet skiing, which was successful. She said in caption: "Jet skiing like a pro & that was my first time!!!! Fiji u r awesome!!! (sic)" In another picture, Ileana rests on the beach against a picturesque background of sea and clouds (sort of) merging at the horizon. She said: "Welcome to my private island. #justkidding (sic)." Here are pictures from Ileana D'Cruz's work-vacay in Fiji:


What better way to watch this beautiful Fijian sunset than by singing and dancing with these multi talented sailors!!! #fijinow #fijihappy #ileanainfiji

Meanwhile, Andrew Kneebone shared these two pictures of Ileana, in which she's dressed in Zara and H&M separates. In one, Ileana is in relax-mode on the yacht and Andrew described the moment in caption as: "The air is so clear here, the sky so blue, the beer so cold." In another, Ileana danced (with musicians playing acoustic guitars in background) as they "head(ed) to see the sunset at Fiji." Here are pictures of Ileana, clicked by Andrew Kneebone:


@ileana_official relaxing in Fiji. The air is so clear here, the sky so blue, the beer so cold :) www.ak-p.com

A post shared by Andrew Kneebone Photography (@andrewkneebonephotography) on May 29, 2017 at 4:31am PDT

@ileana_official dancing as we head to see the sunset at Fiji.

A post shared by Andrew Kneebone Photography (@andrewkneebonephotography) on May 29, 2017 at 8:54pm PDT

Ileana started her day in Fiji by sunbathing in this gorgeous Renge dress. "Enjoying the Fijian sun," she wrote in caption.

Ileana D'Cruz worked in Telugu film for six years before she debuted in Bollywood opposite Ranbir Kapoor in Anurag Basu-directed Barfi!. Ileana has also featured in films like Phata Poster Nikhla Hero, Main Tera Hero, Happy Ending and Rustom.
Her upcoming films are Baadshaho and Mubarakan