In Which Shah Rukh Does What he Was 'Forbidden' to, Posts Pic of AbRam 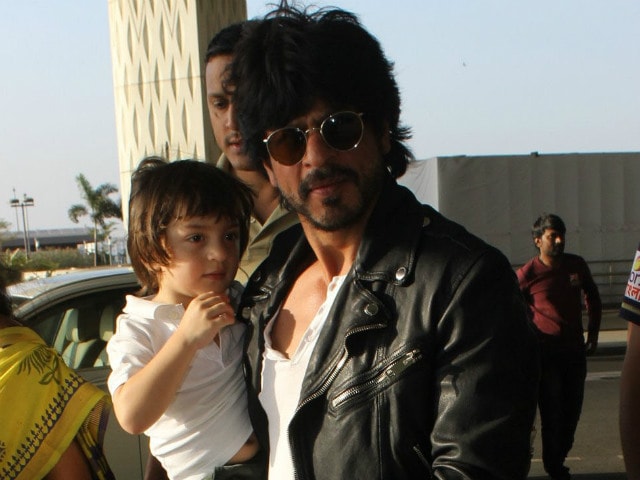 Shah Rukh Khan and AbRam photographed at the Mumbai airport.

Shah Rukh Khan has been 'forbidden' by his family to post pictures of them on social media but a photo of his youngest child AbRam proved too tempting to resist.
So he Instagrammed it on Wednesday.
Bad Shah Rukh!
The picture was taken in London, where SRK and family attended 18-year-old Aryan Khan's school-leaving ceremony and also brought in director Karan Johar's birthday.
SRK's probably in trouble for this but possibly less trouble than he'd be in if one could actually see three-year-old AbRam:


I am forbidden by family to post their pics on the net but sometimes all u need is some balls to tread the forbidden...

Here's a better picture from Karan Johar, who turned 44 on Wednesday:

KJo's vilayati birthday celebration turned out to be stuffed with friends from home - Kareena Kapoor, her husband Saif Ali Khan, Sidharth Malhotra and Ranbir Kapoor. Amitabh Bachchan's daughter and granddaughter Shweta and Navya, who graduated from the same school as Aryan, were also on the guest list.

When childhood besties have kids we love!!!

KJo is currently busy shooting his next movie Ae Dil Hai Mushkil in London. The film stars Aishwarya Rai Bachchan and Anushka Sharma along with Ranbir.
Meanwhile, the Khans and Shweta Bachchan cheered Aryan and Navya as they graduated on Monday. Aryan and Navya attended Sevenoaks School in Kent, England.
Gauri shared pictures from the graduation day which also featured her daughter Suhana: