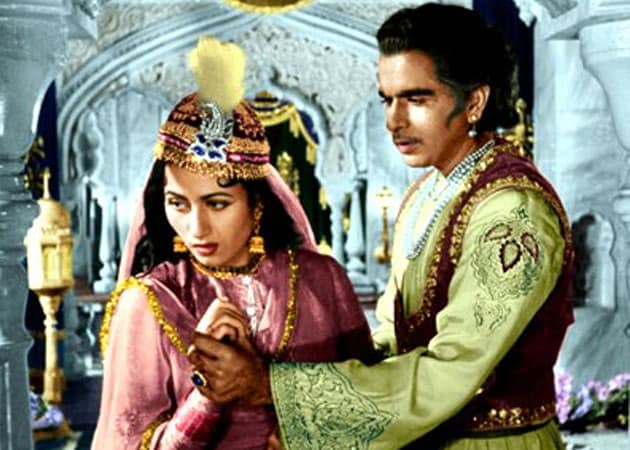 Dilip Kumar and Madhubala in a still from Mughal-e-Azam

Epic love story Mughal-e-Azam (1960) was a cinematic landmark in many ways. It was grand on every scale, spent years in the making, and presented incredible challenges in terms of shooting and lighting.

Epic love story Mughal-e-Azam (1960) was a cinematic landmark in many ways. It was grand on every scale, spent years in the making, and presented incredible challenges in terms of shooting and lighting. It became a blockbuster hit, spending 15 years as the highest grossing Bollywood film until it was toppled by Sholay in 1975.
Did you know:
K Asif only directed two films in his life, the second being Mughal-e-Azam. A third, Love And God, was left unfinished when he died at age of 48.
Mughal-e-Azam's original cast featured Sapru, Chandramohan and Nargis. The film was shelved for five years when Chandramohan died, halfway through shooting, and then recast with Prithviraj Kapoor, Dilip Kumar and Madhubala. Tabla maestro Ustad Zakir Hussain was considered for the role of the young Prince Salim. The role eventually went to Jalal Agha. Decades later, Zakir Hussain made his acting debut in 1983's Heat And Dust and followed it up with an appearance in 1998's Saaz.
Mughal-e-Azam was the most expensive film made in Bollywood at the time and remained so for decades. No expense was spared for the elaborate costumes, which were stitched in Delhi and embroidered in Surat. The jewellery was made in Hyderabad, the crowns in Kohlapur, the weapons in Rajastha and the shoes in Agra. 2000 camels, 4000 horses and 8000 extras - some of them actual soldiers on loan from the Indian Army - were used in the battle scenes. The film cost a whopping Rs 1.5 crores - almost Rs 40 crores today - to make.
The song Pyar Kiya To Darna Kya cost Rs 10 million to make. It reportedly required 105 re-writes before music director Naushad gave it his approval. The only way Naushad could get the reverberation he wanted was to have Lata Mangeshkar sing the song in a studio bathroom.
Cinematographer R D Mathur had to experiment with lighting to shoot the famous Sheesh Mahal setting of Pyar Kiya To Darna Kya. He tried painting the mirrors with wax to check the glare, which worked but also made the visuals dull. He then tried placing strips of cloth strategically to create bounced lighting.
Madhubala's heavy chains were authentic, not lightweight fakes. Already suffering from an unsuspected heart condition, the chains left her bruised and bedridden for days.
K Asif wanted to shoot a Tamil and English versions of Mughal-e-Azam. The film was dubbed in Tamil and released as Akbar, but did so badly that the English version, with Shakespearean actors from England to dub, was dropped.
K Asif was bent on having Ustad Bade Ghulam Ali to provide the singing voice of Tansen in the film. Ustadji declined and was asked to name his price by the director. He asked for Rs 25,000 - a small fortune at the time - to put K Asif off. Not only did K Asif agree to the price quoted, he also paid Ustadji an advance fee. In the film, Ustadji sings two songs - Prem Jogan Ban Ke and Shubh Din Aayo Raj Dulara.
When bookings for the film opened, there was chaos and near-riots at Mumbai's famous Maratha Mandir. Fans reportedly waited in queue for days, with family members ferrying them food from home. The police had to intervene when the crowd, reportedly a 100,000 strong, became too unruly. The tickets were dockets containing photographs and trivia about the film and are now considered collector's items.