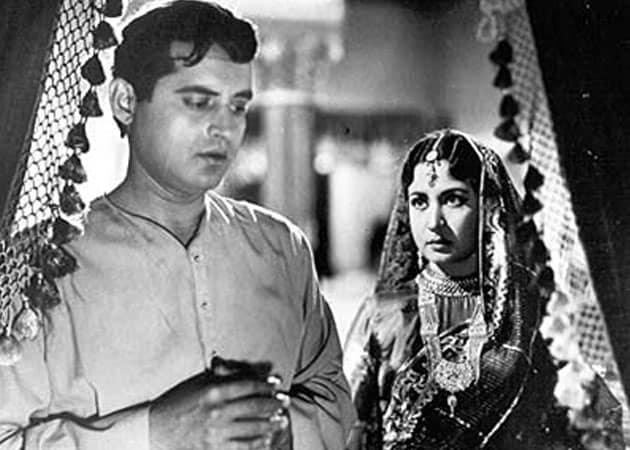 A still from the movie Sahib Bibi Aur Ghulam

Black and white masterpiece Sahib Bibi Aur Ghulam was an adaptation of Bengali author Bimal Mitra's tale of decaying feudalism paralleled by the downward-spiral of a zamindar's neglected wife. A classic Guru Dutt film, it was hailed for the seminal, stunning performance of Meena Kumari as the alcoholic Chhoti Bahu. Sahib Bibi Aur Ghulam was the fourth Indian film to be sent to the Oscars. It won four Filmfare awards and was nominated for the Golden Bear at the Berlin Film Festival.
Did you know:
Sahib Bibi Aur Ghulam was to be directed by Guru Dutt, also the producer and star. However, he decided never to direct again after Kaagaz Ke Phool, now a cult classic, failed spectacularly at the box office. He roped in friend Abrar Alvi to direct Sahib Bibi Aur Ghulam, parts of which are still thought to have been ghost-directed by Guru Dutt.
Shashi Kapoor was the first choice for the role of Bhootnath, losing it when he showed up two-and-a-half hours late for a meeting with Guru Dutt and Abrar Alvi. The next choice was Bengali actor Biswajeet, whose Hindi film debut it would have been. Biswajeet backed out because he didn't want to be tied into an exclusive contract with Guru Dutt. Finally, Guru Dutt cast himself as Bhootnath, the Ghulam.
Meena Kumari won the Filmfare Best Actress award in 1963 for her performance as Chhoti Bahu. That year, she was the only actress up for Best Actress with two other nominations apart from Sahib Bibi Aur Ghulam - Aarti and Main Chup Rahungi.
Sahib Bibi Aur Ghulam was India's entry to the Oscars in 1963. After the film was submitted, Guru Dutt reportedly received a letter from the Academy berating him for the portrayal of a female alcoholic.
Even rule-breaker Guru Dutt could not ignore outraged reactions to a last scene which showed Chhoti Bahu resting her head in Bhootnath's lap as they travel in a carriage. The scene was reshot to show a conversation between the two characters. The tune of the song that was originally meant to accompany the scene - Sahil Ke Taraf Kashti Le Chal - was re-used by music director Hemant Kumar in Ya Dil Ki Suno from Anupama.