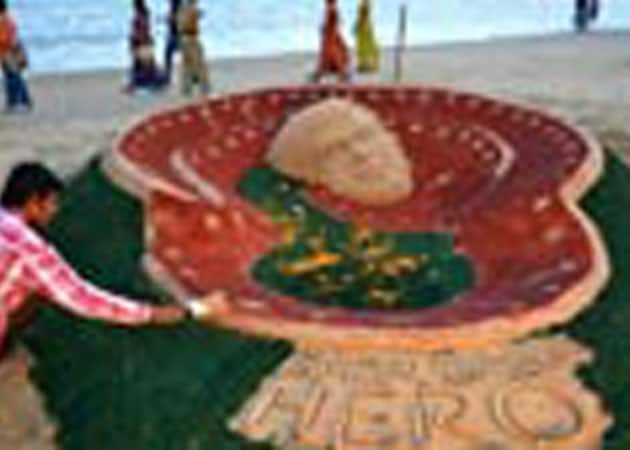 Sudarsan Pattnaik had created a huge sculpture in Odisha as a tribute to Bollywood legend Dev Anand in 2011.

Sand artist Sudarsan Pattnaik has created a sand sculpture of legendary filmmaker-cum-writer Satyajit Ray on a beach in Cannes during the 11 day International Cannes Film Festival, which began on Thursday.

Sand artist Sudarsan Pattnaik has created a sand sculpture of legendary filmmaker-cum-writer Satyajit Ray on a beach in Cannes during the 11 day International Cannes Film Festival, which began on Thursday.
Sudarsan, with the help of his student Bulu Mohanty, created the six-foot sculpture on beach Zamenhof, Canto Port, Cannes. It was inaugurated by India's Ambassador in France, Sudarsan told IANS over phone from France.
"Movie maker Ramesh Sippy and actor Kamal Haasan were among many other eminent personalities present on the occasion," he said.
Sudarsan said he used five tonnes of sand to create a long movie reel on the face of the legendary writer. He also created a six feet tall Taj Mahal with the message 'Incredible India'.
"This event is supported by India Tourism Paris and Air India. I am very happy to come to Cannes for this festival. So, I decide to pay my tribute to my legendary writer," he said. (Also read: Indian Sand Artist Sudarsan Pattnaik to Create Sculpture in Cannes )
Sudarsan, a native of Odisha's Puri town, has been conferred this year with the Padma Shri award, the fourth highest civilian award in India.
He has participated in more than 50 international sand sculpture championships and festivals across the world and has won many prizes. (Also read: Sand tribute to Dev Anand )