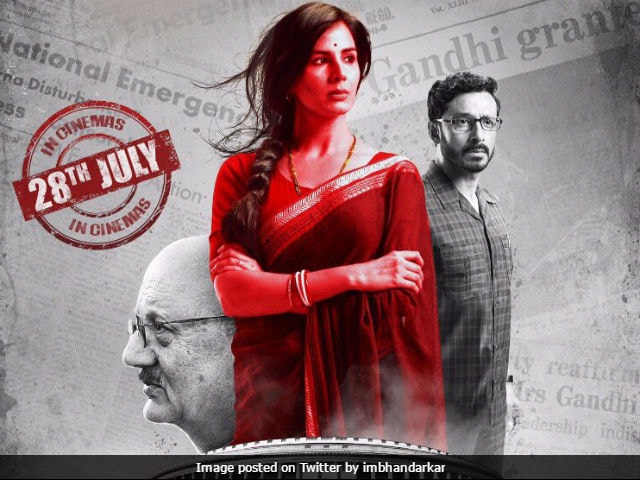 The first poster of Neil Nitin Mukesh's upcoming movie Indu Sarkar was unveiled by the makers of the film today. The intriguing poster features Kirti Kulhari, Anupam Kher and Tota Roy Chowdhury. In the poster, Kirti Kulhari, who will be seen portraying the role of a rebel poetess in the film, is seen taking a stand against the system. "It takes ONE Woman to change the world, #InduSarkar unfolding History on 28July," wrote director Madhur Bhandarkar. Neil Nitin Mukesh, who portrays the role of Sanjay Gandhi in the film, is missing from the first poster. Indu Sarkar is based on the period between 1975 to 1977, when Prime Minister Indira Gandhi declared a state of emergency across the country.
See the first poster of Neil Nitin Mukesh and Kirti Kulhari's Indu Sarkar here:


It takes ONE Woman to change the world, #InduSarkar unfolding History on 28July
@IamKirtiKulhari@AnupamPkher@tota_rc@NeilNMukeshpic.twitter.com/G2bJl16L2J

Actress Supriya Vinod will be seen portraying the role of former Prime Minister Indira Gandhi in Indu Sarkar.
Last week, Neil Nitin Mukesh completed the shoot of Indu Sarkar. The 35-year-old actor shared a picture from the sets in which he is seen posing with filmmaker Madhur Bhandarkar.


And it's a wrap for #indusarkar last day of shoot was simply amazing with @imbhandarkar what an honour being a part of this legendary song "chadta Sooraj dheere dheere " originally sung by Ustaad Aziz Naza and now re sung by his son #mujtabaaziznaza recreated by #AnuMalik ji. Choreographed by one of the finest ..my dearest @ad7777adil

In March, a still from Indu Sarkar had gone viral on the Internet.


We can expect some ultimate performance. #NeilNitinAsSanjayGandhipic.twitter.com/XmFhL59mhb

Indu Sarkar marks Neil Nitin Mukesh's second collaboration with Madhur Bhandarkar. The duo has previously worked together in 2009 movie Jail.
Indu Sarkar has been produced by Bharat Shah and is scheduled to release in theatres on July 28.
Neil Nitin Mukesh last made a cameo appearance in 2016 movie Wazir. After Indu Sarkar, he will be seen in Rohit Shetty's Golmaal Again, co-starring Parineeti Chopra, Ajay Devgn, Tabu, Tusshar Kapoor and Arshad Warsi.