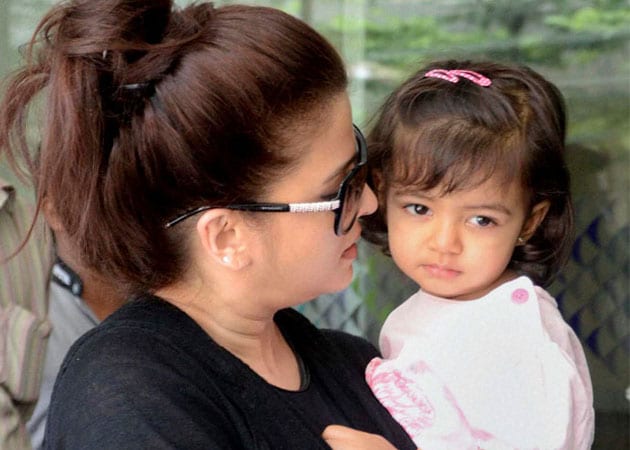 Aishwarya personally looked after all the arrangements

Aaradhya Bachchan turned two on November 16 and her proud parents celebrated the day in their own special way.

Aaradhya Bachchan turned two on November 16 and her proud parents celebrated the day in their own special way. Instead of holding a big bash, Aishwarya and Abhishek Bachchan arranged a private party with people close to them.
According to a source who attended the do, the theme of the birthday party was fairytale. The bash was held at Pratiksha, which was decorated with flowers, balloons and pink, green and yellow lights for the big day. The invites, which had Aradhya inviting her tiny tot friends, were sent in a pink bucket full of colourful candies.
"In the evening, the lights came on, the bungalow looked liked a fairy tale castle as the lights on the trees were of shapes of characters from CBeebies and Teletubbies and Tinker Bell, The Carousel, etc. Going with the theme, the cake also had green, pink and yellow shades. There was a bubble spewing machine and huge cut outs of butter flies," adds a guest.
Proud mother Ash seemed busy with the proceedings while everyone else was making merry.
Star kids present were
Hrehaan and Hridhaan Roshan with their dad Hrithik, Viaan Raj Kundra with mum Shilpa Shetty, Nysa and Yug Devgn with mum Kajol, Saira Bhupathi with mother Lara Dutta, Azad Khan with mother Kiran Rao and many more.
"Aishwarya was personally looking after each and everything and all the arrangements were done by her. She was complimented by some mothers present for the grand arrangement. Each child went home happy armed with a personalised return gift keeping their ages in mind," said the source.