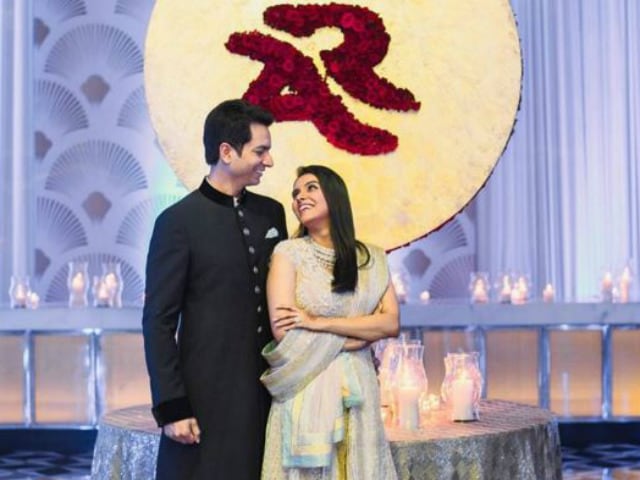 Asin, who made her debut in Bollywood with 2008's Ghajini, has featured in films like London Dreams and Ready. The actress was last seen in 2015's All Is Well, co-starring Abhishek Bachchan, Rishi Kapoor and Supriya Pathak. Asin married Rahul in two private ceremonies in New Delhi on January 19

Pictures of Asin and Micromax founder Rahul Sharma's wedding reception have been doing the rounds of social media. Asin, 30, married Rahul, 40, in two private ceremonies in New Delhi on January 19. They hosted a grand reception in Mumbai for their friends and colleagues on January 23.
A fan club shared an image where Asin and Rahul make a lovely picture. Asin looks resplendent in an embellished gold lehenga choli while Rahul looks dashing in a black sherwani and white pyjamas:

The couple also roped in actress Shilpa Shetty and her husband Raj Kundra to frame a few lovely moments:


Marriage is beautiful when you marry a friend!

Congratulations to the super Gorgeous Asin & @rahulsharma May their life together be filled with love, happiness & prosperity Ting ! #wedding #happiness #celebration


Congrats rahul and asin!!!!may god bless u both with all d happiness:):)#rahul#asin#wedding#mp#friends

Sajid Khan, who directed Asin in Housefull 2, took a selfie with the newly-wed couple:

R Madhavan, who looked handsome in a black suit, was accompanied by his wife Sarita Birje:

Actress Tabu, who glittered in a white lehenga choli, also took a selfie with Asin and Rahul:


Tabu clicks a selfie with the newlyweds #Asin and @rahulsharma, Anna Singh and @rohiniyer at the wedding reception pic.twitter.com/g5uamQVjgi

Asin and Rahul also posed for a picture with PR professional Rohini Iyer:

Jacqueline Fernandez shared an image as she dressed up for Asin's wedding. The actress looked beautiful in a white and gold sari, accessorized with traditional jewellery.

Asin's Housefull 2 co-star Akshay Kumar, who introduced her to Mr Sharma, served as the best man at the actress' wedding. (Also Read: Asin Shares Stunning Pics From Her Wedding to Micromax Boss Rahul Sharma)
On January 19, the couple had a church wedding in the morning. The second of the two-part ceremony, performed as per Hindu rituals and attended by the couple's close friends and family, was held at the Dusit Devarana hotel in New Delhi in the evening amid tight security.
The actress also shared several pictures from her wedding on Instagram:

Asin, who made her debut in Bollywood with 2008's Ghajini, has featured in films like London Dreams, Ready and Bol Bachchan. The actress was last seen in 2015's All Is Well, co-starring Abhishek Bachchan, Rishi Kapoor and Supriya Pathak.