Inside Pics of Manish's Birthday Party With Sridevi, Alia, Kareena 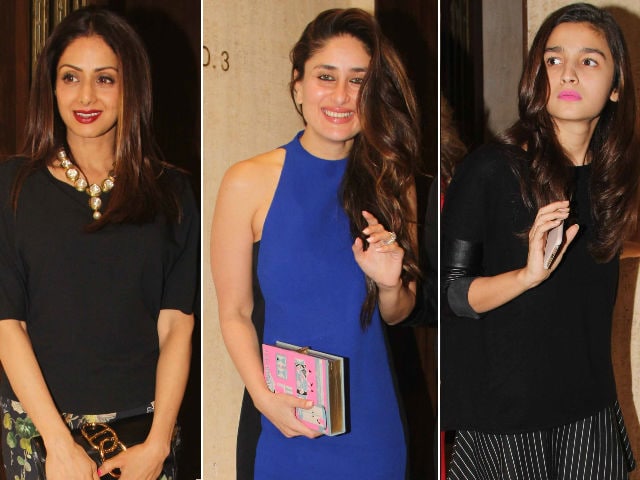 Designer Manish Malhotra hosted a simple 'friends-only' birthday party at his Mumbai residence on December 5. Only, his BFFs include the top most fashionistas of Bollywood - actresses Sridevi, Kareena Kapoor Khan, Karisma Kapoor, Alia Bhatt and Shilpa Shetty Kundra.
Manish posted images from the party on Twitter:

Karisma and Raveena Tandon were dressed casually while Sridevi upped the casual look with floral pants instead of denims. Shilpa looked pretty in monochrome and Kareena rocked a blue number. Urmila Matondkar scored low on our fashionmetre. (In Pics - Angels at Manish's Party: Sridevi, Kareena, Alia)


Birthday with my diva close friends my favourites pic.twitter.com/I6LJ2ELSIG

Actress Alia Bhatt, one of Manish's recent muses, was not in the group pics, but she certainly attended the party. She looked cute in a black outfit.

More pictures were shared by Karisma, Raveena and Sridevi:

Manish had four birthday cakes, one of which was the latest issue of a fashion magazine celebrating the designer's 25 years in the fashion industry with Bollywood's leading ladies. Thank you, Karisma, for the picture: