Inside Pics of Sushmita Sen's Birthday Party in Dubai

Sushmita Sen celebrated her 41st birthday with her two daughters Renee and Alisah, mother Shubhra and others in Dubai 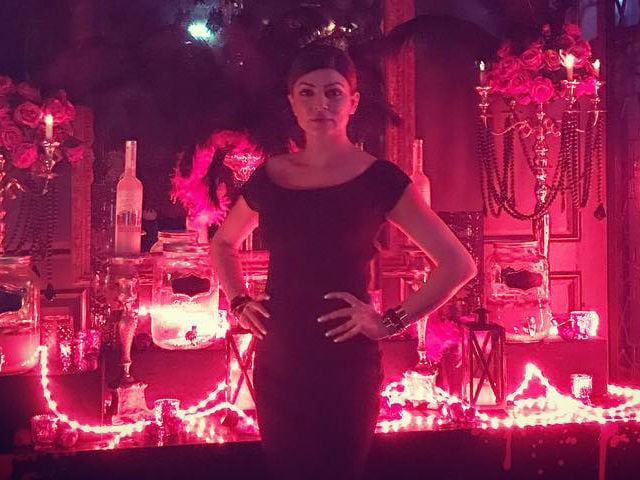 Actress Sushmita Sen instagrammed some pretty adorable pictures from her 41st birthday party and we can't help but share them. The actress looked stunning in a black polka-dotted dress as she had the time of her life with her two daughters Renee and Alisah, mother Shubhra and others. The Main Hoon Naa actress is on a birthday vacation in Dubai.
Sushmita, now 41, 'remains a baby'

Thank you soooooo much for all the #birthday wishes!!! while #SushmitaSen turns #41yrsold today... #Titan (my pet name) remains a baby!!! seen here on my Maa's lap surrounded by people l love!!! What a happpyyyyy start to my birthday!!! #joiedevivre #birthdaybegins #19thnovember #Dubai #friends #fun #gratitude my darling Tushna n Sreejaya my babies Renée n Alisah!!! I love u guys!!!!

Sushmita was grinning from ear-to-ear, all day long:

My beautiful #heart n #soul the little things they do ALL THE TIME to make life special!!! Thank you God for Renée n Alisah!!! Mmuuaah!!!! #moments #birthdayfun #cherished

Happy Birthday 'Maa-demoiselle' !!!! brought in my birthday tonight at #lapetitemaison #dubai and this is a combination cheese cake from my daughters and my friend who always addresses me as 'Mademoiselle' nicely done!!! #sharing #moments #birthdaycake

Sushmita Sen made her Bollywood debut in 1996 film Dastak after winning the Miss Universe title in 1994.She went on to star in films like Main Hoon Na with shah Rukh Khan, Maine Pyar Kyun Kiya with Salman Khan and Aankhein with Amitabh Bachchan.
Her last Bollywood film was No Problem, which released in 2010 while she was last seen on the big screen in 2015's Nirbaak, also her debut film in Bengali cinema.