We have film critic Anupama Chopra to thank for posting pictures of Priyanka's lavish New York home after filming with the actress for her new show Beneath The Surface. Priyanka, dressed simply for a night in, played hostess in her lovely apartment, taking us into her shiny kitchen and comfortable living room 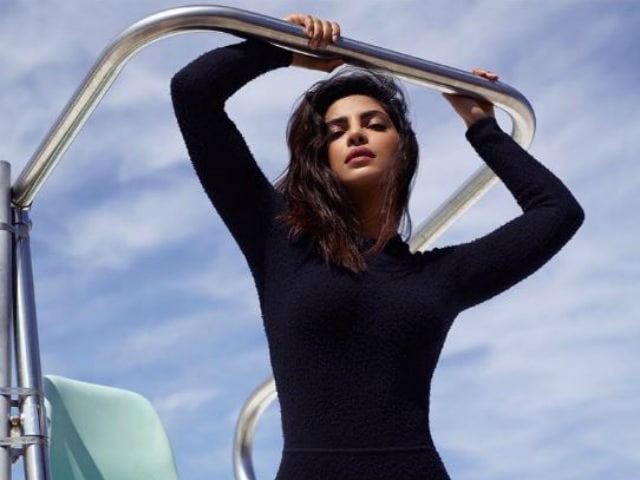 Priyanka Chopra recently dismissed reports that she's moved to New York for five years but she is at least temporarily a Big Apple native while she films the second season of her TV show Quantico. The 34-year-old actress spends less and less time in Mumbai and her upcoming presenting gig at the Emmys means she isn't coming home any time soon.
So 'home' for right now is New York, whatever she might say, and since all her projects are now Stateside, Priyanka's got herself an apartment in New York. And lucky us, we get to peep inside her flat on social media.
We have film critic Anupama Chopra to thank for posting pictures of Priyanka's lavish New York home after filming with the actress for her new show Beneath The Surface. Priyanka, dressed simply for a night in, played hostess in her lovely apartment, taking us into her shiny kitchen and comfortable living room.
Cooking up a storm:


Shooting the launch episode of #BeneaththeSurface w @priyankachopra in her New York home.Thanks for letting me in! pic.twitter.com/xtrekvurWZ

Here's a collage of moments from the shoot, which ended with a hug:


Spent an exhilarating & exhausting day w @priyankachopra in NY. Don't know how she does it- that 2 in killer heels! pic.twitter.com/XYzwZH2LfC

Meanwhile, Priyanka herself has been sharing glimpses of her home on Instagram.
This looks like it should be Christmas but it was actually Priyanka's 34th birthday celebrations:


Feels like xmas morning.. But it's birthday night. Thank you all for the thoughtful presents gestures and messages.. I feel very loved... Even after a 16 hour day on set I feel so blessed and grateful. Here's to everyone who loves me and supports me. I am because of you. #blessed

Priyanka's Quantico co-star Yasmin Al Masri came to visit and revealed more glimpse of the house - an installation on one wall, a bookshelf, more books on the coffee table.


That's how u pick up a glass of wine! @jazmasri lol glad u came home last night! Proud of u! It was a time to celebrate ! #homebirds

After winning the Miss World beauty pageant in 2000, Priyanka Chopra made her Bollywood debut in 2003'sAndaaz. Now, she's an international celebrity and has been shuttling between countries. This year alone, she attended the Oscars and won a People's Choice Award. Priyanka also made it to Time 100 List.
Last seen at home in Prakash Jha's Jai Gangaajal, Priyanka Chopra's current line-up is keeping her abroad for now - she has Hollywood debut Baywatch, co-starring Dwayne Johnson, releasing on May 19, 2017.
Good thing she has a place to call home.