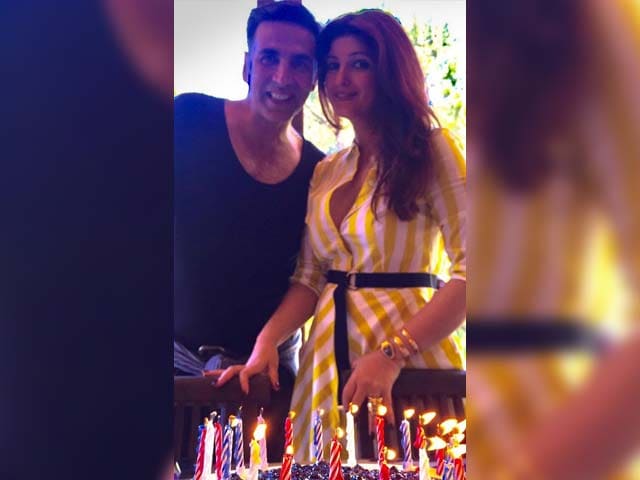 Author Twinkle Khanna is vacationing in Cape Town for her birthday week and celebrated her big day with husband, actor Akshay Kumar, some wine, cheese and a delicious-looking cake in the African port city. Twinkle coincidentally shares her birthday with her superstar father Rajesh Khanna, and turned 43 on December 29. "I am lucky to share a birthday with my father - a bittersweet day," Twinkle wrote on Instagram when she posted a collage of moments from her big day. Akshay Kumar also Instagrammed an adorable message for Twinkle: "Tina, never change," wrote Akshay. Twinkle and Akshay both offered glimpses of the intimate birthday party on Thursday.
Dressed in yellow and white, Twinkle was chic as ever. Also, can you spot Twinkle and Akshay's teenaged son Aarav in the group picture? Twinkle and Akshay's daughter Nitara, who is always safe-guarded from the cameras, was tactfully left out of the pictures.


I am lucky to share a birthday with my father-a bittersweet day now -friends and family, some wine and cheese and of course dad's favourite creme brulee#233;e #salut

Twinkle, Akshay and a lot many birthday candles to blow out:


Your love, humour and madness make me keep falling in love with you every single day...Happy birthday Tina, never change

A heart-warming birthday wish citing Rajesh Khanna arrived from Twinkle on Thursday. Rajesh Khanna died of cancer in July 2012 and would have been 74 this year. "I still see you.. #happybirthdaytous," wrote Twinkle.


I see you-in my reflection off the back of a gleaming spoon, in a gesture my sister makes , in the arch of my son's eyebrows- I still see you.. #happybirthdaytous

Meanwhile, the Kumars are having a blast in 'paradise:'


Winter in paradise - 34 holidays matching wits with the bestie and we now seem to be matching clothes as well :) #capetown

Twinkle Khanna made her acting debut with 1995's Barsaat and starred in films like Baadshah and Mela. She was last seen in 2001's Love Ke Liye Kuch Bhi Karega and opted for a career in interior designing and writing. "I have no acting skills. You need acting skills to act, not intelligence. They're two different skills," she told NDTV in November. Twinkle is the author of two books - Mrs Funnybones and The Legend Of Lakshmi Prasad. Twinkle will also produce director R Balki's next film under her brand new Mrs Funnybones Movies.
Meanwhile, Akshay Kumar's Jolly LLB 2 releases on February 10. Akshay also stars as the prime antagonist in Rajinikanth's 2.0.