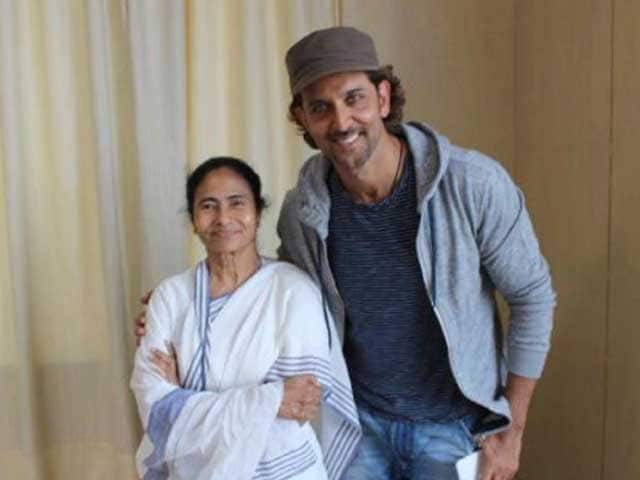 Mamata Banerjee also requested Hrithik to shoot in Kolkata, which the actor gladly agreed to.

Bollywood actor Hrithik Roshan said meeting West Bengal Chief Minister Mamata Banerjee was "inspiring" and reminded him of the hospitality and warmth of the Bengali community, which he "misses" a lot.
Hrithik tweeted

Meeting didi was inspiring n full of Bengali warmth which I miss so much. @Mamataofficial#womanpowerpic.twitter.com/c0yVfLjukB

Ms Banerjee retweeted Hrithik's message and thanked him with a post of her own on the microblogging site.

Thank you so much RT @iHrithik Meeting didi was inspiring n full of Bengali warmth which I miss so much. @Mamataofficial#womanpower

The Bang Bang! star, who's paternal grandmother, Ira, was a Bengali, performed at the Indian Premier League (IPL 8) opening ceremony at the Salt Lake stadium in Kolkata on Tuesday.
In his stunning second live act in the city after 15 years, Hrithik cast a spell on his fans and sealed his connect with West Bengal.
Hrithik, who's maiden live performance after his Bollywood debut took place at the same event, was overcome with nostalgia and fondly recalled the first live performance of his career.

The actor had earlier met Ms Banerjee on Tuesday and had promised to attend the 21st edition of the Kolkata International Film Festival to be held later this year. The West Bengal Chief Minister also requested the actor to shoot in Kolkata, which the actor gladly agreed to.
To show his respect and love for the city, Hrithik sported a stole during his act, which was gifted to him by Ms Banerjee.