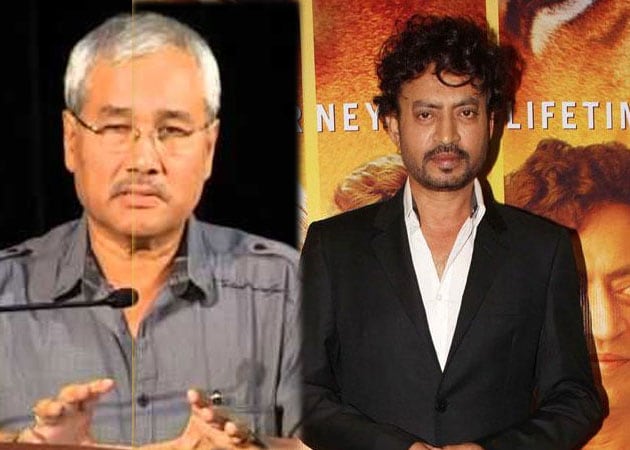 Irrfan Khan and Jahnu Barua will represent the country at the Abu Dhabi Film Festival (ADFF), which will celebrate 100 years of the $2-billion Indian movie industry as part of its special programme this year.

Irrfan Khan and Jahnu Barua will represent the country at the Abu Dhabi Film Festival (ADFF), which will celebrate 100 years of the $2-billion Indian movie industry as part of its special programme this year.
The ADFF awaits strong Indian, Arab and foreign celebrity presence in its seventh edition, which begins on Thursday (October 24).
Irrfan, Bollywood's crossover star, will be here to represent Qissa, an Indo-European venture in which the actor essays the role of a Punjabi man, who tries to adjust his life after the country's partition in 1947. Irrfan will be accompanied by the movie's director Anup Singh. Their film will have its Middle East premiere as part of ADFF's New Horizons section.
Veteran filmmakers Jahnu Barua and M S Sathyu will be here for a special reason. Their films Halodhia Choraye Baodhan Khai and Garam Hava, respectively will be screened here as part of the "Celebrating Indian Cinema" select programme. Other films to be screened in the section include Guru Dutt's Pyaasa, Ritwik Ghatak's Subarnarekha and Mani Kaul's Duvidha.
Other Indians who will attend the gala include Hindi and Bengali actress Moushumi Chatterjee, who will represent Aparna Sen's movie Goynar Baksho, which will have its Gulf premiere here.
Director Richie Mehta will be here for the Middle East premiere of Siddharth, about a poor Delhi street merchant in desperate search of his missing young son.
An attraction will be former tennis player-turned-filmmaker Ashok Amritraj, who will be at the fest to talk about his inspiring journey.
From the global world, there will be director Daniel Schechter, whose Life Of Crime will open the fest. He will be accompanied by actor Mark Boone Junior for a discussion post the film's screening at the fest, where household names will walk the red carpet alongside new talents.
Also attending the opening night Thursday is Oscar-winning US actor Forest Whitaker, who will receive the Black Pearl Career Achievement award. Palestinian actress Hiam Abbass, whose film Peace After Marriage, world premieres at ADFF 2013, will also be presented with a Black Pearl Career Achievement award.
From the Arab world will be names like Mervat Amin, Hend Sabri, Ahmad Ezz, Basel Khayat, Eyad Nassar, Kinda Aloush, Abed Fahad, Manal Khader, and Nesrine Tafesh.
Egyptian stars Lebleba and Khaled Abol Naga, whose latest film Villa 69 will have its world premiere at ADFF, will also join the gala. Other Arab talents at ADFF this year include internationally recognised actor Saleh Bakri.
Stars from the Gulf region will include Mohammed Al Mansour, Dawood Hussain, Huda Al Khatib, Khaled Ameen, Ahmed Iraj, Samera Ahmad, Ahmad Al Jasmi and Maisa Al Maghribi.
International directing talents at the fest will see Danis Tanovic, Amma Asante and Jia Zhangke. The fest will conclude on November 2. The ceremony for the winners of the Black Pearl awards will take place on October 31.