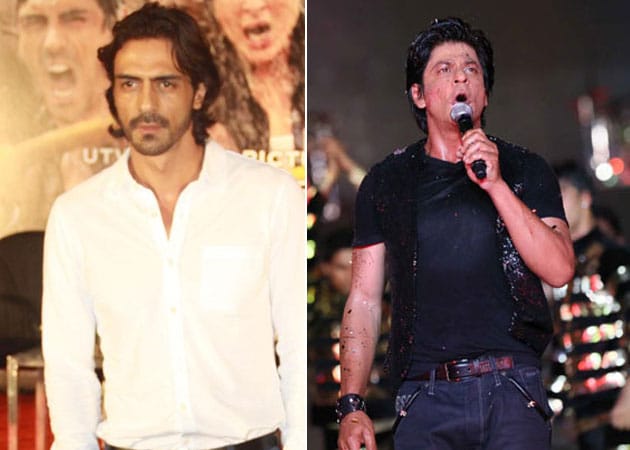 Arjun Rampal may have been missing from Shah Rukh Khan's Eid bash but he made it a point to attend Shaad Ali's party on the same occasion.

Arjun Rampal may have been missing from Shah Rukh Khan's Eid bash but he made it a point to attend Shaad Ali's party on the same occasion. The director held a party at his Juhu home, which was attended by Amitabh and Abhishek Bachchan, Gulzar, Vishal and Rekha Bhardwaj, Shankar-Ehsaan-Loy among others.
Says an onlooker, "Arjun was accompanied by his wife Mehr and Abhishek Kapoor who came along with his girlfriend Pragya. Arjun even happily posed for snapshots."Adds a source, "B-Town has been speculating about Arjun's no show at SRK's bash. His wife Mehr was spotted arriving solo for the event. There are no snapshots of him arriving at Mannat. This has led to speculation about things not being still well on their front."
For a while now Arjun and SRK's strained relationship has been under the scanner. There was a time when King Khan and Arjun were an intrinsic part of each other's lives. But something went awry between the two.
Rumours about their strained friendship started doing the rounds ever since the release of RA.One and the infamous Eid party at Mannat when apparently Mehr had something to say about the presence of an actress at the bash. The Khan and Rampal families also used to vacation together during New Year in Dubai, but all this is a distant past now.
During media interactions for his recent release D Day, when he was apparently asked about his former buddy SRK, Arjun had preferred a no comment stance. Adds the source, "It is obvious that both are not on the same page yet. At a special screening of D Day held at Mannat for SRK'S group of friends, Arjun was again conspicuous by his absence."