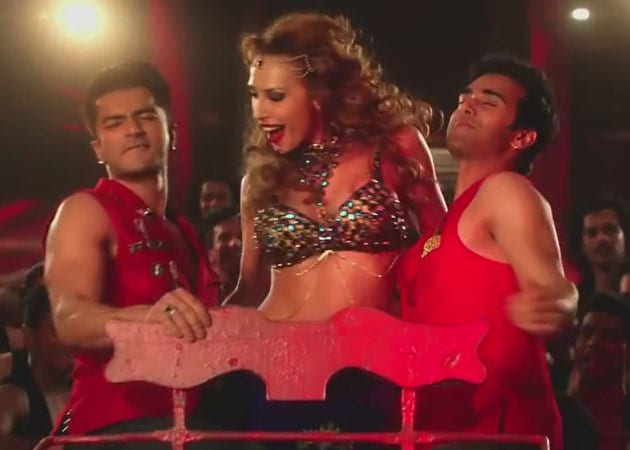 A still from the song Ummbakkum

Actor Salman Khan's alleged Romanian girlfriend Iulia Vantur has bagged a spot in film-in-progress O Teri, produced by Salman's brother-in-law Atul Agnihotri. Iulia, who is rumoured to be The One for so-far-confirmed bachelor Salman, features in an item number called Ummbakkum, wearing very little and gyrating in time-honoured Bollywood fashion.
The peppy number, sung by Mika Singh and Jaspreet Jasz, features O Teri lead actors Pulkit Samrat and Bilal Amrohi vying for the attention of the Romanian beauty.
With O Teri - co-starring Sarah Jane Dias, Sara Loren and Anupam Kher - Salman continues his habit of giving newcomers a ticket to Bollywood. His last film, the poorly-received Jai Ho, co-starred debutante Daisy Shah. He previously gave actresses Sonakshi Sinha and Zarine Khan their big breaks with Dabangg and Veer.
Salman revealed he was tired of being single and didn't rule out the possibility of marrying Iulia at the India Today Conclave 2014 held last week. "Now I'm in transit period and I like it. From the age of 15, I did not get a transit period. For the first time, I have such a chance to sigh. I am sighing more since it has been two-and-a-half years. It's time to stop sighing because something soon will happen in my life. I follow humanity. I follow Islam, Christianity, and follow right thing as much I can. I have been kind of blessed. Father is Pathan, mother is Hindu, second mother is Catholic, and brother-in-law is Punjabi. Wife, I am thinking to bring from outside," Salman said.
Watch Iulia Vantur's item number: