Jagga Jasoos: Can You Spot Ranbir Kapoor In This Pic?

Jagga Jasoos: We have seen Ranbir as a school student as well as a sneaky spy and now, he appears dressed in the uniform of a boy Scout 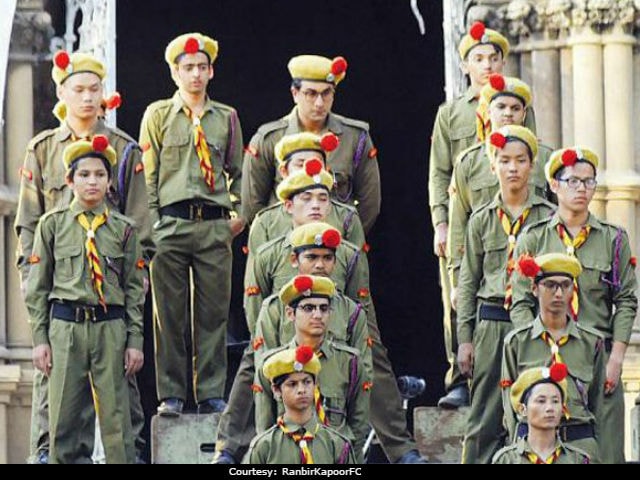 Actor Ranbir Kapoor is all set to play the protagonist in comedy-detective drama Jagga Jasoos. Meanwhile, social media keeps us updated with glimpses of the actor, dressed variously, on the Internet. A new picture of Ranbir, believed to be from the sets of Jagga Jasoos have been shared on social media and is going viral. We have seen Ranbir as a school student as well as a sneaky spy and now, he appears dressed in the uniform of a boy Scout. In Jagga Jasoos, Ranbir features as a spy, who is in search of his father. Katrina Kaif features as his goofy accomplice in the Anurag Basu-directed film.
In the picture gone viral, Ranbir Kapoor features with fellow boy Scouts dressed in uniform. Can you spot the Jagga Jasoos actor in this pic?

Meanwhile, Ranbir has put on as many as 15 kilos to play Sanjay Dutt in his biopic. Pictures, in which Ranbir Kapoor looks like a younger version of Mr Dutt, were shared on the Internet some time ago:


"Working with Rajkumar Hirani is a treat and with Ranbir Kapoor, a double treat." - Paresh Rawal #Duttbiopicpic.twitter.com/mewY5pxykC

Meanwhile, there might be a change of schedule for Jagga Jasoos, as informed by the director in a tweet. The release date of Jagga Jasoos might be delayed to avoid coinciding with school examinations, tweeted Mr Basu. If the movie releases on April 7, it will be part of another clash with Amitabh Bachchan's Sarkar 3 releasing on that day.

Ranbir Kapoor was last seen as a struggling musician in Karan Johar's Ae Dil Hai Mushkil. After Jagga Jasoos, he will star in the Sanjay Dutt biopic. Ranbir also has Dragon, a movie directed by Ayan Mukerji and co-starring Alia Bhatt, in the pipeline.