Jagga Jasoos: Is Katrina Kaif about to embark on another Jagga Jasoos adventure? 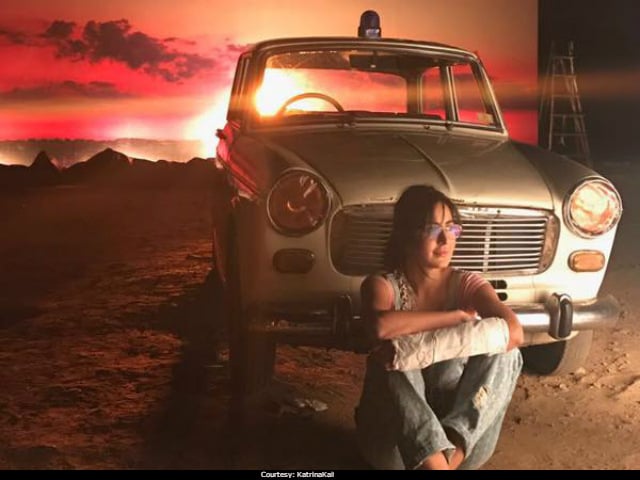 Katrina Kaif looks cute as a button in the pic (courtesy: KatrinaKaif )

Katrina Kaif, the one half of Jagga Jasoos lead cast, recently shared a musing on Facebook from the sets of the film. Katrina added some advice of sorts as caption to a picture of herself, from a studio setting. The picture features Katrina in her signature bespectacled Jagga Jasoos look with a bandaged left arm. The 33-year-old actress can be seen sitting against a backdrop poster featuring a sunset. The only other member accompanying Katrina is a run-down car. Dressed in a denim dungaree and a tee, Katrina looks cute as a button. Is Katrina about to embark on another Jagga Jasoos adventure? Guess we'll have to wait till April 7 for the answer. Ranbir Kapoor plays the protagonist in the Anurag Basu-directed film.
"Never waste any amount of time doing anything important when there is a sunset you should be sitting under .... (even if it's a cutout)," Katrina wrote on Facebook. This is what she posted:

Katrina Kaif stars as accomplice and friend to Ranbir Kapoor's character. However, somewhere mid-way though the film's trailer, Ranbir can be seen getting jelly legs when Katrina strikes a pose. The trailer of Jagga Jasoos reveals another interesting fact: Jagga Jasoos recreates a number of scenes from Ranbir's Barfi!, also directed by Anurag Basu.
Watch The Trailer Of Jagga Jasoos Here:

Ranbir Kapoor's much delayed and now upcoming Jagga Jasoos has been extensively shot in Darjeeling, parts of Morocco, Cape Town and South Africa. Ranbir and Katrina, who broke up earlier in 2016 after dating since their 2009, will collaborate for the third time. Ranbir Kapoor, 34, and Katrina Kaif, 33, are co-stars of Ajab Prem Ki Ghazab Kahani and Raajneeti.
Jagga Jasoos is scheduled to hit screens on April 7, 2017.