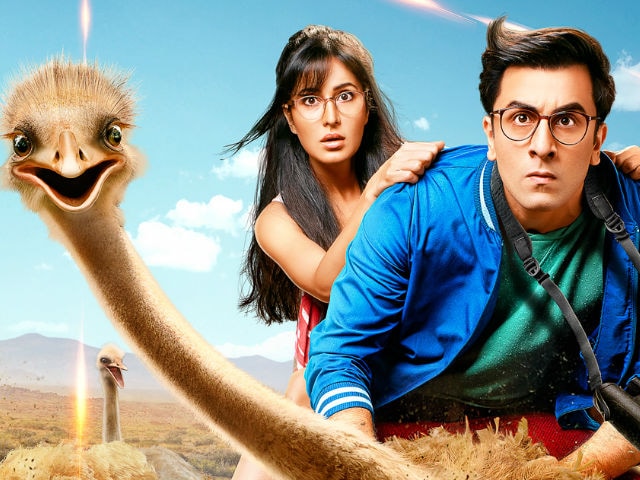 Hum do aur hamara ek... ostrich. The first poster of Ranbir Kapoor and Katrina Kaif's sleuth comedy Jagga Jasoos was released on Monday and shows that we can expect a good laugh from the film. The poster shows a rather determined looking Ranbir and Katrina grimly riding an ostrich. The ostrich, one of a flock, appears thrilled to have passengers. A cartoonish plane chases them down. It looks like TaleSpin with celebrity actors. Ranbir and Katrina's film, after much delay, will finally release on April 7. Jagga Jasoos is directed by Anurag Basu, and jointly produced by Picture Shuru Entertainment (owned by Anurag and Ranbir) and UTV Disney.
Here's the first poster of Jagga Jasoos The filming of Jagga Jasoos started in 2014 and has been primarily shot in Cape Town, South Africa. Anurag reshot scenes with Ranbir and Katrina after he was unhappy with the first schedule, which delayed the film. Katrina and Ranbir, who were dating back then, became busy with filming other projects. Ranbir featured in a box office duds like Roy and Bombay Velvet before starring in Tamasha which did fairly decent business. His latest film Ae Dil Hai Mushkil, which released last October, was a hit. Katrina also released four films in this period - Bang Bang!, Phantom, Fitoor and Baar Baar Dekho.
Ranbir told NDTV in an exclusive interview, "It's adventure, it's mystery, there's a musical, there's romance, there's comedy and it's the kind of films that I will always want to make on screen if I was a director." He also spoke about his special bond with Anurag Basu, who previously directed him in Barfi! "I am so possessive, I don't want any actors to work with him. I go outside and I spoil his reputation - 'He's so that, he's messed up, there's no schedule, there's no script' - because I don't want anyone to work with him because I understand his genius," Ranbir said.
Jagga Jasoos, believed to be about a young detective inn search of his father, has been a long time in the making. "You know, there was a point where I told (Anurag) Basu that should we shelve the film? Is it happening? And he was also in a dilemma, but we kept coming back to it. Because there was the soul of the film, the story he was trying to say...the world, the characters were just not leaving us. But thankfully, we have a sequel in the cards," Ranbir told NDTV.
After the film's first poster, we hope the makers of Jagga Jasoos will share more information soon. A teaser maybe?